Please note: As of January 20, 2017, information in some news releases may be out of date or not reflect current policies.

Across the ocean, Salay Ry has spent years laying bricks in Cambodia to help repay a family debt. At 13 years old, his education takes a back seat to his family’s subsistence. These stories of child exploitation are far too common, and two reports released today seek to bring greater awareness and attention to the problem. 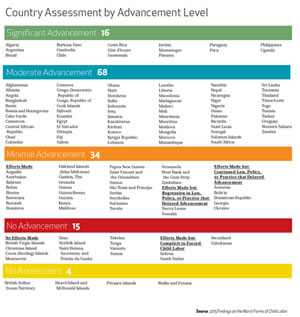 Today, the U.S. Department of Labor released its flagship reports that shed light on the challenges of – and potential solutions to – exploitative child labor and forced labor around the world.

Mandated by the Trade and Development Act of 2000, the fifteenth annual edition of the “Findings on the Worst Forms of Child Labor” recognizes the efforts of 137 countries and territories around the world to address child labor and assesses whether each country has made significant, moderate, minimal or no advancement over the past year. In 2015, the year reviewed in this report, 16 countries made a significant advancement in their efforts to address child labor, more than ever before.

The seventh edition of the “List of Goods Produced by Child Labor or Forced Labor,” mandated by the Trafficking Victims Protection Reauthorization Act of 2005, identifies 139 goods from 75 countries that the department has reason to believe are made by child labor or forced labor. One good – garments from Jordan – is being removed from the list, based on information that forced labor has been significantly reduced. ILAB continues to monitor closely labor conditions in the Jordanian garment sector, as ongoing improvement will be important to ensure that these reductions last.

The reports not only identify problems and progress, they recommend solutions. “The Findings on the Worst Forms of Child Labor” identifies sectors where children are working, analyzes countries’ child labor laws and their enforcement in practice, and highlights policy frameworks, social programs, and efforts among stakeholders to combat the worst forms of child labor. It calls attention to areas in which additional action is needed and recommends steps governments can take to accelerate progress in eliminating child labor. Similarly, the “List of Goods Produced by Child Labor or Forced Labor” identifies efforts made in select countries like Vietnam, Indonesia and Costa Rica, among others, to combat child labor and forced labor and offers recommendations to countries that want to adopt and implement reforms to end such practices. 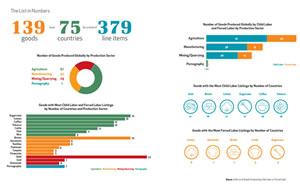 The release of these reports follows Deputy Undersecretary for International Affairs Carol Pier’s announcement of a new $9 million grant by the department’s International Labor Affairs Bureau: Measurement, Awareness Raising, and Policy Engagement in Support of Sustainable Development Goal Target 8.7 September 2. The grant will support Alliance 8.7, a global partnership that includes government agencies, trade unions and other civil society organizations, business representatives and academics. This partnership aims to meet Target 8.7 of the United Nations’ Sustainable Development Goals, adopted in September 2015, which states: “take immediate and effective measures to eradicate forced labor, end modern slavery and human trafficking and secure the prohibition and elimination of the worst forms of child labor, including recruitment and use of child soldiers, and by 2025 end child labor in all its forms.”

“Our research and reports provide a roadmap for reaching SDG Target 8.7,” Pier said. “By identifying sectors where these problems exist, suggesting concrete actions to address them, and offering tools like our child labor data app, we can help the global community tackle child labor and forced labor in a strategic, targeted and coordinated way.”

Accompanying the release of the reports was also an update to the department’s “Sweat & Toil” app, which condenses the reports into a mobile application, as well as open source data for use by developers through an application programming interface. The user-friendly smart phone app helps to increase transparency and make the data more accessible for government officials, businesses, workers and consumers. The updated app includes new data on labor and criminal law enforcement.

“Data collection and transparency, including national surveys, are essential to combatting child labor and forced labor,” said Pier. “The only way to make real progress on an issue is by fully understanding it.”

ILAB’s mission is to advance worker rights and livelihoods, particularly for the world’s most vulnerable, and ensure that workers are treated fairly and able to share in the benefits of the global economy. ILAB works to help improve working conditions, raise living standards, protect workers’ ability to exercise their rights, and address the workplace exploitation of children and other vulnerable populations.

For more than 20 years, ILAB has been producing reports to raise awareness globally about child labor and forced labor. Since 1995, ILAB has also funded 290 projects in more than 90 countries to combat the worst forms of child labor and forced labor, in particular by building the capacity of governments to enact and enforce rights and protections for workers and by providing assistance to vulnerable children and their families.

More information is available at www.dol.gov/EndChildLabor. Printed versions of the reports are available from the Office of Child Labor, Forced Labor and Human Trafficking, Bureau of International Labor Affairs, U.S. Department of Labor, 200 Constitution Ave. NW, Room S-5317, Washington, D.C. 20210. Inquiries can also be made via telephone at 202-693-4843, fax at 202-693-4830 or email at ocft@dol.gov.

Join the conversation on Twitter by using #ChildLabor #ForcedLabor and tagging @USDOL.