WASHINGTON — U.S. Secretary of Labor Thomas E. Perez and Mexican Secretary of Labor and Social Welfare Jesús Alfonso Navarrete Prida today signed a joint ministerial declaration to carry out consultations under the provisions of the North American Agreement on Labor Cooperation, the labor side agreement to the North American Free Trade Agreement, to help inform Mexican workers about their labor rights under U.S. laws.

The Mexican Secretariat of Labor and Social Welfare in 2013 requested ministerial consultations with the U.S. Department of Labor on issues raised in three public submissions filed with the Mexican Secretariat under the NAALC. The submissions concerned the rights of Mexican migrants working in the United States on H-2A and H-2B visas in sectors such as agriculture, forestry, food packing, fairs and carnivals.

The two secretaries agreed on a joint ministerial declaration that articulates cooperative activities concerning the matters raised in the three public submissions. Under the terms of the joint ministerial declaration, the department and the Mexican Secretariat intend to use the department's Consular Partnership Program, which has been in place since 2004 with the Mexican Ministry of Foreign Affairs and its consulates in the United States, to conduct educational and outreach activities to inform Mexican workers in the United States and their U.S. employers about workers' workplace rights and employers' responsibilities. This information will be provided in Spanish and English to workers and employers by the department's Wage and Hour Division and Occupational Safety and Health Administration and Mexico's consulates, along with the National Labor Relations Board and the Equal Employment Opportunity Commission. In carrying out these activities, the department and the Mexican Secretariat will seek input from stakeholders in the United States and Mexico.

Secretary Perez and Mexican Ambassador Eduardo Medina Mora also renewed the 2004 and 2010 joint declaration between the Department of Labor and the Ministry of Foreign Affairs of Mexico, under which the Consular Partnership Program has been implemented. 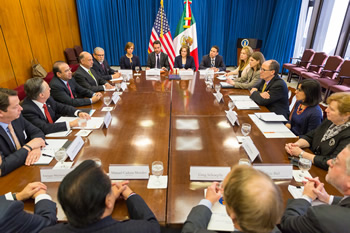 Representatives of the Mexican Secretariat of Labor and Social Welfare (left), the Mexican Embassy (left), and the U.S. Department of Labor (right) meet before a signing ceremony for joint declarations to inform Mexican workers about their labor rights under U.S. laws..

"Today's signing of the joint declarations is another important step forward in helping ensure that all workers in the United States know their rights and that all employers know their responsibilities under the law," said Secretary Perez. "I am pleased that the Department of Labor will be working with the Government of Mexico and others to continue making progress toward achieving that goal."

"With the joint ministerial declaration we reinvigorate a process of bilateral collaboration with an innovative mechanism, in which stakeholders have a relevant role in designing and implementing the action plan of the declaration," said Secretary Navarrete. "This has been possible by the commitment of the Department of Labor and the Secretariat of Labor and Social Welfare to ensure protection of migrant workers."

"Under the Consular Partnership Program that we renew today, Mexican Consulates across the United States have entered into over 100 local arrangements with their Department of Labor counterparts. We are confident that this fruitful collaboration will continue to thrive with the ultimate goal of protecting the rights of all Mexican workers in this country," Ambassador Medina Mora stated.