WASHINGTON — Officials of the U.S. Department of Labor's Wage and Hour Division, the New York State Labor Department and the New York State Attorney General Eric T. Schneiderman's Office today signed memoranda of understanding to protect the rights of employees by preventing their misclassification as independent contractors or other nonemployee statuses. 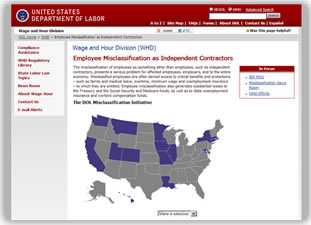 The memoranda of understanding represent a new effort on the part of the three agencies to work together to protect the rights of employees and level the playing field for responsible employers by reducing the practice of misclassification. The New York State Labor Department and New York State Attorney General's Office are the latest state agencies to partner with the Labor Department. In the last two years, the Wage Hour Division has secured over $18.2 million in back wages for more than 19,000 workers where the primary reason for minimum wage or overtime violations under the Fair Labor Standards Act was that workers were not treated or classified as employees. This represents a 97 percent increase in back wages following the implementation of these agreements.

"Working with the states is an important tool in ending misclassification," said M. Patricia Smith, U.S. Solicitor of Labor. "These collaborations allow us to better coordinate and ensure compliance with both federal and state laws alike."

"Misclassification deprives workers of rightfully-earned wages and undercuts law-abiding businesses," said Laura Fortman, the principal deputy administrator of the Wage and Hour Division. "These memoranda of understanding send a clear message that we are standing together with the State of New York to protect workers and responsible employers and ensure everyone has the opportunity to succeed."

"When employers misclassify employees as independent contractors for their own gain, they hurt their employees and they even hurt other businesses — the law-abiding employers who don't steal from their employees," said New York State Labor Commissioner Peter Rivera. "I'm proud of this partnership we're beginning here today to root out bad actors and bring them to justice."

"This partnership with the U.S. Department of Labor will help New York continue our work of aggressively enforcing the labor laws and ensuring a level playing field for employers who play by the rules. Sharing information and cooperating in investigations will help protect the rights of New York's workforce, and will lead to more effective enforcement and greater compliance by employers," said Terri Gerstein, Labor Bureau Chief for New York Attorney General Eric T. Schneiderman. The New York State Attorney General's office brings select cases to enforce the state's labor laws, including both civil and criminal cases. For more information, please visit the Labor Bureau's website at: http://www.ag.ny.gov/bureau/labor-bureau/.

Business models that attempt to change or obscure the employment relationship through the use of independent contractors are not inherently illegal, but they may not be used to evade compliance with federal labor law. Although legitimate independent contractors are an important part of our economy, the misclassification of employees presents a serious problem, as these employees often are denied access to critical benefits and protections–such as family and medical leave, overtime compensation, minimum wage pay and Unemployment Insurance–to which they are entitled. In addition, misclassification can create economic pressure for law-abiding business owners, who often find it difficult to compete with those who are skirting the law.

The mission of the department is to foster, promote and develop the welfare of the wage earners, job seekers and retirees of the United States; improve working conditions; advance opportunities for profitable employment; and ensure work-related benefits and rights. To learn more about the FLSA's requirements, call the Wage and Hour Division's toll-free hotline at 866-4US-WAGE (487-9243) or visit its website at http://www.dol.gov/whd/.