WASHINGTON — A new rule prohibiting discrimination on the bases of sexual orientation and gender identity in the federal contracting workforce is being announced today by the U.S. Department of Labor. The rule implements Executive Order 13672, which was signed by President Obama on July 21.

"Americans believe in fairness and opportunity. No one should live in fear of being fired or passed over or discriminated against at work simply because of who they are or who they love," said U.S. Secretary of Labor Thomas E. Perez. "Laws prohibiting workplace discrimination on the bases of sexual orientation and gender identity are long overdue, and we're taking a big step forward today to fix that."

EO 13672 tasked the department with updating the rules implementing EO 11246 to add gender identity and sexual orientation to the classes it protects. While 18 states, the District of Columbia and many businesses, large and small, already offer workplace protections to lesbian, gay, bisexual and transgender employees, July's executive order was the first federal action to ensure LGBT workplace equality in the private sector. 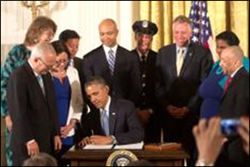 "We are building on the work of presidents and members of Congress from both parties who have expanded opportunities for America's workers," said Patricia A. Shiu, director of the department's Office of Federal Contract Compliance Programs, which will enforce the new requirements. "This rule will extend protections to millions of workers who are employed by or seek jobs with federal contractors and subcontractors, ensuring that sexual orientation and gender identity are never used as justification for workplace discrimination by those that profit from taxpayer dollars."

The final rule will become effective 120 days after its publication in the Federal Register and will apply to federal contracts entered into or modified on or after that date. More information is available at http://www.dol.gov/ofccp/LGBT/.

In addition to EO 11246, OFCCP enforces Section 503 of the Rehabilitation Act of 1973 and the Vietnam Era Veterans' Readjustment Assistance Act of 1974. These three laws require contractors and subcontractors that do business with the federal government to follow the fair and reasonable standard that they not discriminate in employment on the basis of sex, race, color, religion, national origin, disability, status as a protected veteran, and now sexual orientation and gender identity.

The rule is available on the Federal Register's website at http://www.ofr.gov/OFRUpload/OFRData/2014-28501_PI.pdf.