The U.S. Department of Labor Celebrates the 125th Anniversary of Labor Day

WASHINGTON, D.C.  – Today Acting U.S. Secretary of Labor Patrick Pizzella hosted an event commemorating the 125th anniversary of Labor Day on the front steps of the Frances Perkins Building. The Acting Secretary, joined by long-serving members of the Department, unveiled a banner honoring the historic anniversary that will be prominently displayed on the Frances Perkins Building. Acting Secretary Pizzella shared the Department of Labor’s history and celebrated the Department of Labor’s service to the American workforce. 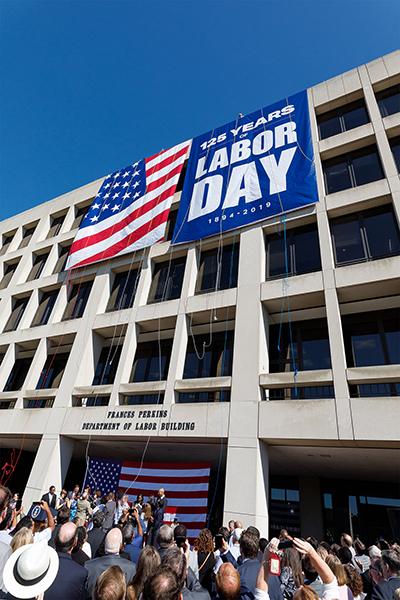 “Labor Day is a celebration of the dignity of America’s workers. Since 1894, on the first Monday in September our nation honors the hardworking Americans who take pride in an honest day’s work,” said Acting Secretary Patrick Pizzella. “We recognize the men and women who build America’s infrastructure, create American products, and develop America’s natural resources. The greatest workforce in the world — the American workforce — has a very bright future.”

On this Labor Day, more than 157 million Americans are working – the highest number of Americans working ever recorded. 5.7 million jobs have been created since January 2017. Unemployment is at 3.7%, near a 50-year low, and has been at or below 4% for 17 months in a row. This is the lowest unemployment going into a Labor Day since 1969. Year-over-year earnings growth has been at or above 3% for a year straight and is currently 3.2%. There are 7.3 million open jobs and there have been more open jobs than job seekers for 16 straight months.

The mission of the Department of Labor is to foster, promote, and develop the welfare of the wage earners, job seekers, and retirees of the United States; improve working conditions; advance opportunities for profitable employment; and assure work-related benefits and rights.