BAD NEUENAHR, Germany – U.S. Secretary of Labor Alexander Acosta delivered the following remarks at an opening session of the G20 Labor and Employment Ministers’ Meeting on women succeeding in the 21st century economy:

“Thank you for this opportunity to speak about women succeeding in the 21st century economy. 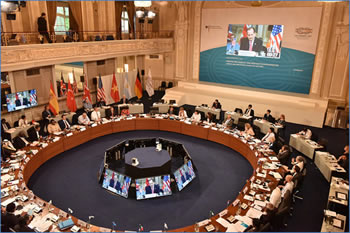 “As the father of two wonderful school-age daughters, I know the vital importance of ensuring that girls and women everywhere can pursue their aspirations, wherever they lead.

“Over the last decade, technological breakthroughs have fundamentally transformed the economy in the United States and the world.

“These changes have improved the way billions of people live, and they are creating global demand for high-skilled jobs.

“But all too often, women do not fully experience these benefits. As Ivanka Trump and World Bank President Jim Yong Kim noted in their recent editorial in the Financial Times, women-owned businesses cluster in sectors with lower profit margins and sometimes lack access to adequate capital. These facts, in turn, limit their ability to invest in the high-technology systems that are transforming the way we do business.

“And women are underrepresented in the science, technology, engineering and mathematics – or STEM –fields, which are playing a critical role in the technological revolution.

“This must change. Women are invaluable players in the global economy, and investing in women is absolutely critical for fully mobilizing the economy in the United States and throughout the world.

“The Trump administration has prioritized investing in the resources required to unleash the full potential of women in the workforce.

“Under the leadership of President Trump, the United States seeks to identify and break down barriers that prevent women from pursuing their aspirations in the workplace.

“The president and I are focused on boosting the number of women who participate in apprenticeship programs, which are an essential key to addressing the skills gap that weighs down the economy in so many of our countries.

“Fuller participation in apprenticeship programs will give more women the skills they need to take advantage of the technology revolution of the last several years.

“We are also tackling the gender imbalance in the STEM fields. In February, President Trump signed into law a bill instructing NASA to foster the entry of women into fields such as aerospace and promote STEM studies to girls in elementary and secondary schools. He also signed a bill authorizing the National Science Foundation to support entrepreneurial programs targeted at women.

“Women’s success is success for us all.

“I look forward to working with each of you, sharing successful experiments in removing barriers to women’s economic participation and working together to ensure that each woman and girl can live out her aspirations to the fullest.”

The meeting follows the secretary’s visit a day earlier to the Munich headquarters and manufacturing plant of the BMW Group to tour the automotive company’s production and technical apprenticeship training facility. View photos here and read more about his trip here.