Frank Kameny, fought to end discrimination in the federal workforce, to be honored with induction in Labor Hall of Honor

WASHINGTON — Frank Kameny, who for decades fought to end discrimination in the federal workplace, will be honored by the U.S. Department of Labor in June with an induction to its Hall of Honor. Kameny's legacy as a civil rights leader has made a monumental difference in improving the lives of all workers all across America.

A World War II veteran and Harvard-educated doctor of astronomy with the U.S. Army Map Service, Kameny was discharged and barred from federal government employment in 1958 after U.S. Civil Service Commission investigators asked if he was a homosexual.

Kameny fought the injustice, eventually taking his case to the U.S. Supreme Court, which denied his petition in 1961. The setback led him to become a co-founder of the first gay rights organization in Washington, D.C., and began his tireless fight to force the nation's largest employer — the federal government — to end discrimination in its employment practices based on sexual orientation.

"Frank Kameny was a groundbreaking leader in the LGBT civil rights movement. He fought tirelessly to live out his truth and to end workplace discrimination," said Secretary of Labor Thomas E. Perez. "At the Department of Labor we work every day to carry on his legacy and ensure that all workers, no matter who they are or who they love, have equal access to opportunity."

His activism led to the first gay demonstration for equal rights at the White House in 1965. Kameny later coined the slogan, "Gay is Good," to combat negative stereotypes of gay and lesbian people and, in 1971, became the first openly gay candidate for Congress. That year, he also publicly challenged the scientific validity of the American Psychiatric Association's theories on homosexuality as a mental disorder at its national meeting. 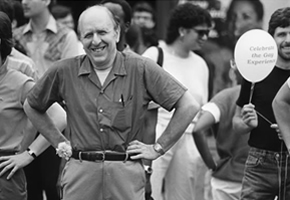 On June 23, 2015, Kameny will join Edward M. Kennedy, Frances Perkins, Bayard Rustin, Dolores Huerta and others who have made life-changing contributions in the field of labor, elevating working conditions, wages, and the overall quality of life of America's working families.

The induction ceremony is expected to draw hundreds who will hear remembrances and tributes by honored speakers and guests. The event will be held in the Department of Labor's Frances Perkins Building. Attendance is by invitation only.