ARLINGTON, Va. — Wielding a large rotating steel drum equipped with sharp tungsten carbide teeth, a continuous mining machine scrapes coal from the mine's seams and drops it onto conveyor belts or into shuttle cars for transport to the surface. As it moves from one tight space to another underground, the massive machine leaves little room — and margin for error — for miners in its path. This high-powered scraper is one of the most efficient methods for extracting coal, yet not without its risks.

Thirty-five coal miners have died since 1984 when they became pinned, crushed or struck by continuous mining machines. To combat these kinds of accidents, a number of mining companies have adopted the use of proximity detection, a technology that uses electronic sensors to detect motion or the location of one object relative to another. These systems can be programmed to send warning signals and stop machines before they injure or kill miners working in the confined space of an underground coal mine. 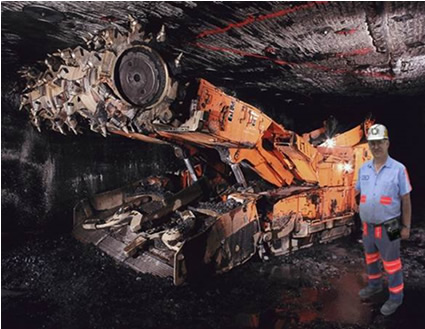 Today, the Mine Safety and Health Administration announced a final rule that will require operators of underground coal mines to equip continuous mining machines with proximity detection systems. It will be published in the Federal Register on Jan. 15 and become effective 60 days thereafter.

"Simply put, the proximity detection final rule will save lives and has the potential to dramatically improve the safety of mining operations," said Joseph A. Main, assistant secretary of labor for mine safety and health. "It already has the support of many in the mining industry. In fact, a number of coal companies installed proximity detection systems long before there was a legal obligation to do so."

With the new rule, a proximity detection system consists of machine-mounted components and miner-wearable components worn by each miner on the working section. The final rule establishes performance and maintenance requirements for these systems and requires training for persons performing the installation and maintenance.

To meet the standards set in the rule, a proximity system must:

Since 2002, MSHA has actively worked with the mining community to identify and investigate proximity detection technologies for preventing accidents. In February 2010, the agency published a Request for Information on proximity detection systems in the Federal Register and a proposed rule in August 2011. The agency held four public hearings where MSHA received comments from the mining public.

Alliance Resource Partners, L.P., which operates 11 mining complexes in the Illinois Basin and Appalachia, has been a pioneer in installing the technology on continuous mining machines. The company currently has 82 continuous mining machines equipped with proximity detection systems. Other mining companies, such as Alpha Natural Resources, Affinity Coal Co. and CONSOL Energy also employ the technology.

"Alliance is appreciative that Joe Main of MSHA is visiting the Gibson North mine today to highlight the importance of the use of proximity detection systems in underground mining operations," said Joe Craft, president and CEO. "Safety is Alliance's very top priority, and our team is committed to serving as an industry leader in the use of safety technology. As part of this commitment, Alliance has been at the forefront of designing and installing proximity detection systems at all of its mining operations and believes that they save lives."