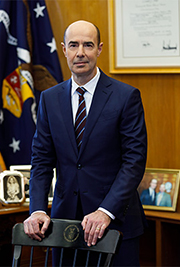 Eugene Scalia was sworn in as Secretary of Labor on September 27, 2019. As Secretary, he oversaw the enforcement and administration of more than 180 federal employment laws covering more than 150 million workers and 10 million workplaces. Laws administered by the Department include the workplace safety requirements of the Occupational Safety and Health Administration (OSHA) and Mine Safety and Health Administration, federal minimum wage and overtime protections, the anti-discrimination requirements applicable to federal contractors, and ERISA's protection of the more than $11 trillion held in employee retirement plans and health plans.

The Department also administered a range of programs intended to support worker training and enhance the skills of the American workforce through grants and other funding to States, educational institutions, and other public and private sector organizations.

As Secretary, Scalia chaired the board of directors of the Pension Benefit Guaranty Corporation—which insures U.S. private pension plans—and was on the board of trustees of the Social Security and Medicare Trust Fund.

Secretary Scalia's priorities included enhancing employment opportunities for Americans by supporting economic growth through reductions in unnecessary regulatory burdens, improving the effectiveness and efficiency of the Department's enforcement programs, and bolstering worker training through apprenticeships and other business-driven programs that emphasize performance and accountability. Under his leadership, the Labor Department supported President Trump's initiatives to promote employment for veterans and military spouses, to overcome the opioid crisis, and to help Americans exiting the criminal justice system re-enter the workforce.

In addition to having served on the White House Coronavirus Task Force, Scalia guided the Labor Department as it played a central role in overseeing the new federal programs intended to help workers and their families respond to COVID-19. The Department was also involved in implementing the U.S.-Mexico-Canada-Agreement, the NAFTA replacement negotiated by President Trump that included the strongest labor protections ever included in an international trade agreement.

When Secretary Scalia was administered the oath of office in 2019, President Trump said that he "is one of the most qualified people ever confirmed as Secretary of Labor." Scalia's experience included serving as Solicitor of Labor—the Department's top legal officer—to then-Labor Secretary Elaine L. Chao, and working as a Special Assistant to Attorney General William P. Barr, for which he received the Justice Department's highest distinguished service award. Scalia spent many years as a partner at a prominent law firm, where he was called a "visionary" by one legal publication for his work challenging unlawful regulations, and was recognized by other publications as a leading practitioner for labor and employment law, securities law, and appellate litigation.