This memorandum provides additional guidance to Wage and Hour Division (WHD) field staff regarding the limitations imposed by the Workforce Innovation and Opportunity Act (WIOA) on the payment of subminimum wages (SMW) under section 14(c) of the Fair Labor Standards Act (FLSA), 29 U.S.C. 214(c). Specifically, this memorandum clarifies that the WIOA requirements apply to employees who are paid commensurate wages under the FLSA or the McNamara-O’Hara Service Contract Act (SCA), 41 U.S.C. 6701 et seq. that are less than the Federal minimum wage (MW),1 but do not apply to commensurate wages paid under the SCA that are above the FLSA Federal minimum wage or to commensurate wages paid pursuant to Executive Order 13658.

Section 14(c) of the FLSA authorizes employers, after receiving a certificate from WHD, to pay SMWs—wages less than the Federal minimum wage, but commensurate with individual productivity—to workers who have disabilities for the work being performed. The certificate also allows the payment of wages that are less than the prevailing wage to workers who have disabilities for work on contracts subject to the SCA (some of which are also subject to Executive Order 13658), and the Walsh-Healey Public Contracts Act (PCA).

Section 458 of WIOA added section 511 to the Rehabilitation Act, 29 U.S.C. 794g (section 511). This provision limits the ability of employers to pay SMWs to persons with disabilities under section 14(c). These requirements took effect on July 22, 2016.

Section 511 requires that youth with disabilities (age 24 or younger) receive various services by the Designated State Unit (DSU) designed to improve their access to competitive integrated employment before they are employed at an SMW, including transition services, vocational rehabilitation, and career counseling, information, and referral services (“pre-SMW employment services”). Section 511 also requires that all workers, including youth, be regularly provided with career counseling, information, and referrals (CCIR) in addition to information about peer mentoring, self-advocacy, and self-determination training opportunities available in their geographical area as a condition to payment of an SMW (“during-SMW employment services”).

WHD issued Field Assistance Bulletin (FAB) No. 2016-2, Fact Sheet 39H, and a public PowerPoint presentation to provide general guidance on the provisions of section 511 and its impacts to the section 14(c) program. This bulletin supplements these materials to define “subminimum wages” for use in applying the section 511 provisions to SMWs paid under other related federal laws.

Section 511(a) prohibits a section 14(c) certificate holder from compensating an individual with a disability who is age 24 or younger at a “wage … that is less than the Federal minimum wage” unless the individual has been provided with the required pre-SMW employment services. Similarly, section 511(c) prohibits certificate holders from continuing to employ any individual at a ”subminimum wage” unless the during-SMW employment services are provided at specific intervals. Finally, section 511(f) defines the term “Federal minimum wage” as “the rate applicable under section 6(a)(1) of the FLSA.” Therefore, the term “subminimum wage” in section 511 refers to a wage rate that is less than the FLSA section 6(a) wage, which is currently $7.25 per hour.

The SCA is a federal labor law that applies to contracts in excess of $2,500 that are entered into by the United States or the District of Columbia, the principal purpose of which is to furnish services in the United States through the use of service employees. Every service employee performing any of the contract work under a service contract covered by the SCA must be paid not less than the monetary wages and required fringe benefits specified in the SCA wage determination included in the contract. The SCA allows employers who hold a section 14(c) certificate to pay service employees with disabilities a commensurate wage based on the prevailing wage required by the wage determination. Employers must pay full fringe benefits, or the equivalent cash payment in lieu of providing the benefits, regardless of whether they hold a section 14(c) certificate. 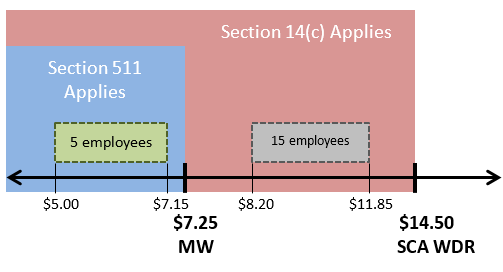 Note: If any employee’s wages fall below the Federal minimum wage, the section 511 requirements will apply to that employee.

Executive Order 13658 establishes a minimum wage for work performed on or in connection with a covered contract with the Federal Government.3 Workers covered by this Executive Order include workers with disabilities whose wages are calculated pursuant to certificates

issued under section 14(c). See Fact Sheet: Final Rule to Implement Executive Order 13658, Establishing a Minimum Wage for Contractors for an overview of the Executive Order regulations, including coverage requirements.

For example, Don works for a section 14(c) certificate holder that has SCA contracts for various cleaning services that are also covered by Executive Order 13658. The SCA WDR for a janitor on one contract is $14.00, and the wage determination rate for a window washer on a different contract is $20.00. 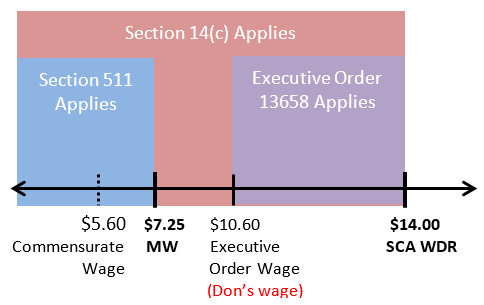 Don currently has a 60% productivity rating for his work as a window washer, resulting in a commensurate wage rate of $12.00 per hour. Since Don’s wage rate for this job is higher than the current Executive Order minimum wage, Don is paid the higher wage rate of $12.00 and, therefore, the section 511 requirements do not apply. 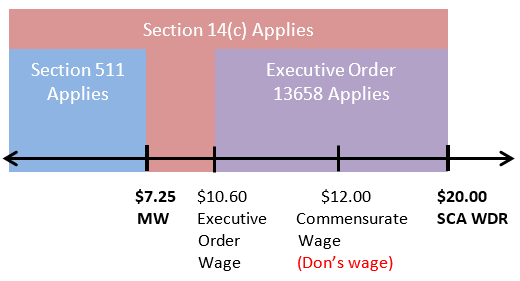 For more information about section 14(c) and section 511, please see the WHD Employment of Workers with Disabilities website at: https://www.dol.gov/agencies/whd/workers-with-disabilities.

1 The Federal minimum wage is defined at section 6(a) of the FLSA.

2 For the purposes of this example, the SCA contract is not subject to Executive Order 13658. See section IV.