Based on the nature of the issue or violation in the on-site and off-site phases, in both Supply & Service and construction evaluations, COs will use different forms or documents. Below is a review of the use of SCNs, PDNs, NOVs and notices to labor unions in various situations.

a. Denial of Access. If a contractor denies access to its premises, records or other information necessary to conduct an on-site or off-site review, the CO must issue an SCN or proceed directly to an enforcement recommendation.378

b. Interference with OFCCP. If a contractor’s representative harasses or intimidates a representative of OFCCP during the course of an on-site or off-site review, or unreasonably interferes with the review process, the CO must issue an SCN or proceed directly to an enforcement recommendation.379

c. Finding of a Violation. If the CO identifies a violation under any of OFCCP’s three laws during an on-site or off-site review, the type of notice the CO must issue depends on the nature of the violations.

e. Unresolved Violation. If, after issuing an NOV, reasonable conciliation efforts to resolve all violations fail, the CO issues an SCN for the unresolved violations.383 The SCN allows the contractor 30 calendar days from receipt of the notice to resolve the violations. 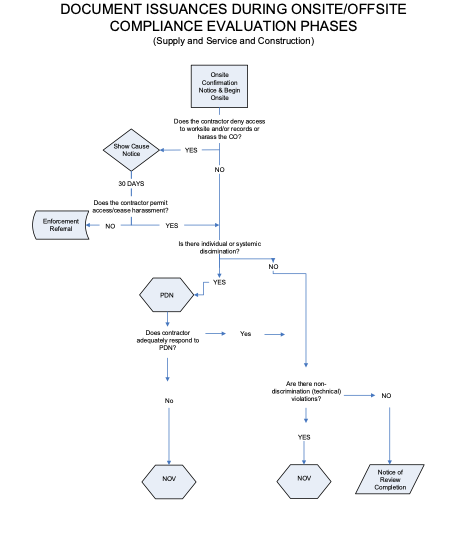 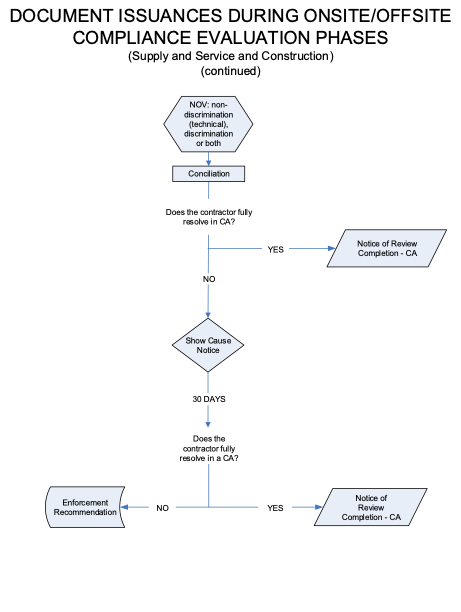