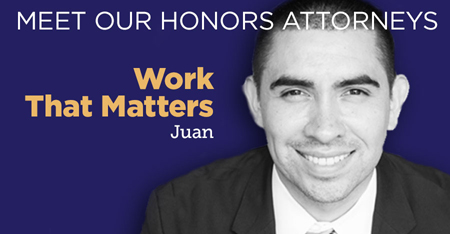 A quote from journalist-turned-novelist Tom Wolfe comes close to capturing the choice that some of our brightest young people face when beginning to prepare for a career: “put your good where it will do the most.” The problem is that it isn’t always easy to figure out how to do that – even after an attorney has committed to a career in public service. In trying to find his answer, Juan undertook a journey of sustained self-reflection that led him to become an Honors Attorney with the Solicitor’s Office at the Department of Labor.

The journey started in El Salvador, where Juan was born and lived until immigrating to the U.S. as a child. In the years that followed, the experience began to shape Juan’s sense of civil rights and economic justice, and he began to seek out ways to help others going through the immigration experience. While working at an immigration law firm, Juan came to understand that the scope of his clients’ concerns went far beyond the immigration process, extending to a need for reassurance that our social and economic protections would apply to them – most notably in the workplace.

Juan’s blossoming sense of responsibility to those who are overlooked or underserved continues with his work as an Honors Attorney. He has been working on matters related to the Employee Retirement Security Act, which protects the retirement benefits of millions of workers. He is providing indispensable guidance on the department’s comprehensive enforcement plan to address labor law violations in Guatemala under the Central American Free Trade Agreement. And, he’s supporting the department’s enforcement of the Labor-Management Reporting and Disclosure Act, which guarantees some rights and provides some transparency for union elections.

That’s a pretty comprehensive portfolio for an attorney in his first year on the job, but for someone like Juan, whose keenest interest is to “help in any way I can,” there aren’t many opportunities that can maximize good quite like the Honors Attorney program. 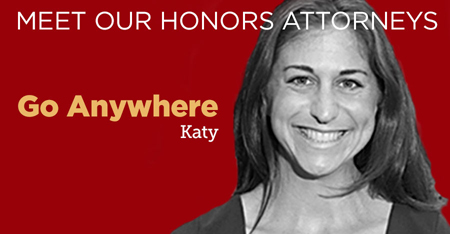 After distinguishing herself as a sharp and skilled policy practitioner with experience in anti-poverty programs and degrees in public health and law, Katy sought to use her talents in employment and labor law. She found the perfect fit in the Honors Attorney program in the Office of the Solicitor at the Department of Labor.

During her two years in the program, the Bay Area native found the opportunity to experiment and build skills before making long-term decisions about her career. Most, if not all, law students face the tough question: “What kind of lawyer do you want to be?” Rarely, though, does one get to explore so many potential answers to that question in a real-world environment the way the Solicitor of Labor’s Honors Attorneys do.

So, after exploring a broad range of experiences in the Honors Program, Katy chose to practice international human rights and labor law. Some of her exciting work includes efforts to guarantee worker protections in Haiti, where the Department’s Bureau of International Labor Affairs has a role in providing technical assistance and monitoring for certain producers of apparel, textiles, and other goods.

This assignment gives Katy the opportunity to experience a country with a rich cultural heritage (she has traveled to Port-au-Prince eight times since she’s been on the job). She’s working to build an inspection and monitoring system from the ground up. She’s analyzing novel questions of international law. She’s working directly with a wide variety of stakeholders, from garment workers, to the Haitian Minister of Labor, to representatives of the International Labor Organization. Every day she gets to see how that rigorous legal analysis and diplomacy translates into meaningful improvements in the livelihoods and living conditions of individual workers and their families.

Katy’s work spans well beyond Haiti. She has also been involved in the historic negotiation of the labor chapters of both the Trans-Pacific Partnership and the new trade agreement with the European Union. 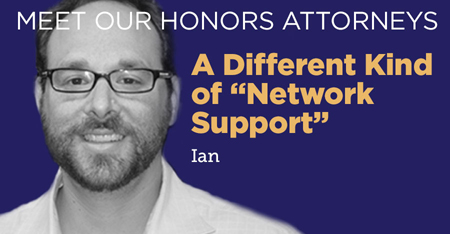 In today’s interlinked professional world, it’s become almost a cliché to say that your network – the people with whom you interact on a regular basis and who help connect you to resources you may not have on your own – is as essential a professional asset as any.

The Honors Attorney program at the Labor Department’s Office of the Solicitor is a great fit for new attorneys looking for a workplace with these kinds of strong networks and opportunities for mentorship. Ask Ian. He was selected to be an Honors Attorney in the second year of this program that began as a pilot 10 years ago. Ever since, he has witnessed the yearly growth of the Honors Attorney network as it created connections and forged relationships across the Solicitor’s Office.

One important way that the program helps expose its attorneys to new connections is by actively moving them from corner to corner of the department, in both the programmatic and geographic sense. Ian began his career with the Honors Program in the National Office and is now civil rights counsel in the department’s regional office in San Francisco. “We’ve been building a community,” Ian says. “And that community helps attorneys who are starting out become integrated into a very complex organization and allows them to effectively navigate the bureaucracy and accomplish things they couldn’t otherwise.”

Once Honors Attorneys see the benefits of this system, they often volunteer to facilitate wider connections for the next cohorts to enter the program, serving as mentors to incoming Honors Attorneys and interviewing and recruiting candidates for the program. It’s a chain of mutual support that goes back to the program’s earliest days. Susan Hutton was in the department’s first class of Honors Attorneys. Today, she’s the Director of the Honors Attorney program. “What Ian has done with all of his efforts to create this network is remarkable,” she says. “Our close-knit and supportive group of Honors Program alumni makes our networking and mentoring program stand out.” 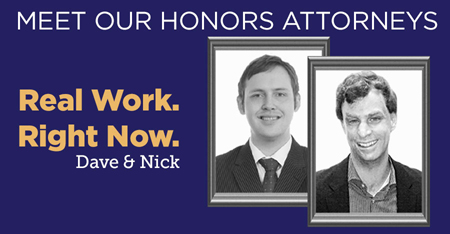 If there’s one thing new Honors Attorneys at the Labor Department’s Office of the Solicitor learn immediately, it’s that they won’t be waiting around to dive into the work. When landing new jobs at other organizations, attorneys can expect a long waiting period before getting their first crack at high-level assignments. Here, there’s “opportunity right off the bat.” Honors Attorneys get started working on consequential legal assignments mere weeks after coming on board.

David and Nick are two of those new attorneys. It helps that they’re both accomplished professionals, well-suited to the accelerated pace of work here at the Labor Department. Still, it takes sharp reflexes and quick study to prepare for the rigors of independent assignments in a new environment, and those challenges can be invigorating.

David came to the Honors Attorney program after clerking for a judge on the U.S. Court of Federal Claims in Washington, D.C., which provided him with keen insights into the important role government attorneys play in framing and litigating important legal issues.

Nick’s journey to the program took a very different route. The Alabama native was an investigative journalist in Tennessee, covering municipal management and policy. But, he says “there’s a difference between being around things that are important and being able to act.”

When he began a summer position at the department’s Office of Federal Contract Compliance Programs, he saw for himself that if there was any place where he could have the opportunity to do something, it was here at the Labor Department.

David works in Philadelphia and Nick in Washington, and both attorneys handle heavy case loads. In the regional office, where David works, attorneys are often tasked with litigating substantial cases related to laws such as the Fair Labor Standards Act and the Mine Safety and Health Act, among others.

Nick’s work in the Washington, D.C., National Office often overlaps with David’s, as it has in Uniformed Services Employment and Reemployment Rights Act cases.

“Even as newer employees, we are provided a full and varied docket—along with big responsibilities.” David says. “That those responsibilities, from writing briefs to appearing in court, are in service to workers and their families makes the job that much more meaningful and gratifying.” 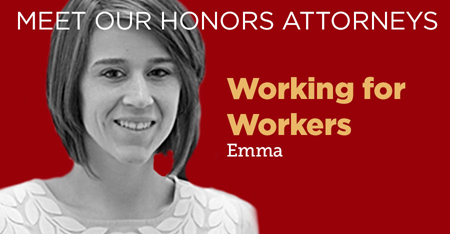 When Honors Attorney Emma set out from Washington, D.C., for a four-month detail with the regional solicitor’s office in San Francisco, she knew that this opportunity to expand the breadth of her legal experience was unusual for someone at the beginning of a career in government. At the Labor Department, much of the front-line legal work happens in its seven regional offices and seven branch offices across the country. Consequently, Emma knew that the assignment would bring her closer to the action. Still, she had no idea just how close until a supervisor asked, “How would you like to work on a hearing in Utah?”

From that moment forward, Emma began an eye-opening assignment defending workers’ rights, one that would drive home just how high the stakes are for workers and their families in the cases the Labor Department investigates. It involved the Department’s wage and hour standards and an investigation into whether a group of construction workers had been paid properly. Soon, Emma found herself speaking directly to the workers, hearing their stories in their own voices, learning about their family lives and what a successful outcome of the case would mean for them.  The construction work these men and women had done was grueling, long days in intense heat – but they had done so with the expectation that with that work, they would be fairly compensated. Naturally, “there was a lot of frustration,” Emma said. But they appreciated that someone was on their side. “They were so grateful that someone was helping them because they felt wronged. Someone was helping them have wage dignity again.”