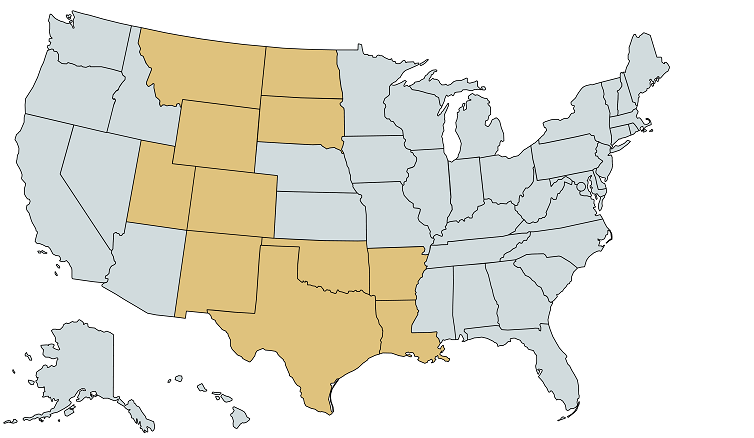 Region VI of the Solicitor's Office is responsible for most civil trial litigation and legal support for the U.S. Department of Labor for matters arising in the following states:

Region VI of the Solicitor's Office:

While the attorneys employed by the Region VI may be called upon to handle cases arising out of any of the Department of Labor's program areas, the majority of work performed in this region arises out of the Occupational Safety and Health Administration, the Wage and Hour Division, and the Office of Federal Contract Compliance Programs. We frequently handle cases involving safety and health violations in the oil and gas, chemical processing, grain handling, mining, and construction industries. Many of our cases also involve wage and misclassification issues arising in the construction, restaurants, and other service-oriented businesses, as well as discrimination cases involving Federal contractors.

In 2010, the Solicitor's Office created a separate litigation unit to handle a backlog of cases pending before the Federal Mine Safety and Health Review Commission. One of those units is housed in Denver. As of March 31, 2016, the Denver MLBP had closed 6,622 MSHA cases and recovered a total of more than $60 million in penalties.

The Dallas office currently offers unpaid summer internships to exceptional law students. The summer program has two six-week sessions and the Dallas office coordinates with the law school to ensure that the intern receives course credit for their summer work. Also, in cooperation with the generosity of Dallas Bar Association Labor and Employment Section, and in cooperation with the SMU Dedman School of Law and Texas A&M University School of Law, the Dallas office hosts one summer position with a stipend paid by the Dallas Bar to a student who demonstrates interest in labor and employment law. Dallas also partners with the Texas Tech University School of Law Regional Externship Program by hosting a third-year law student during the fall and spring semesters. Through this partnership, law students gain real-life practice experience in public service law and unique exposure to the Department of Labor. For questions, you can send an email with the subject line "Internship" to Docket.Dallas@dol.gov.

The Denver office currently hosts summer, fall, and spring law student interns from an array of national and regional law schools. Denver also participates in the Public Service Externship Program in conjunction with the University of Denver School of Law and the University of Colorado School of Law. This program, coordinated by a U.S. Magistrate Judge, provides law students from diverse backgrounds with an opportunity to explore public service legal careers. For questions, you can send an email with the subject line "Internship" to denver.docket@dol.gov.