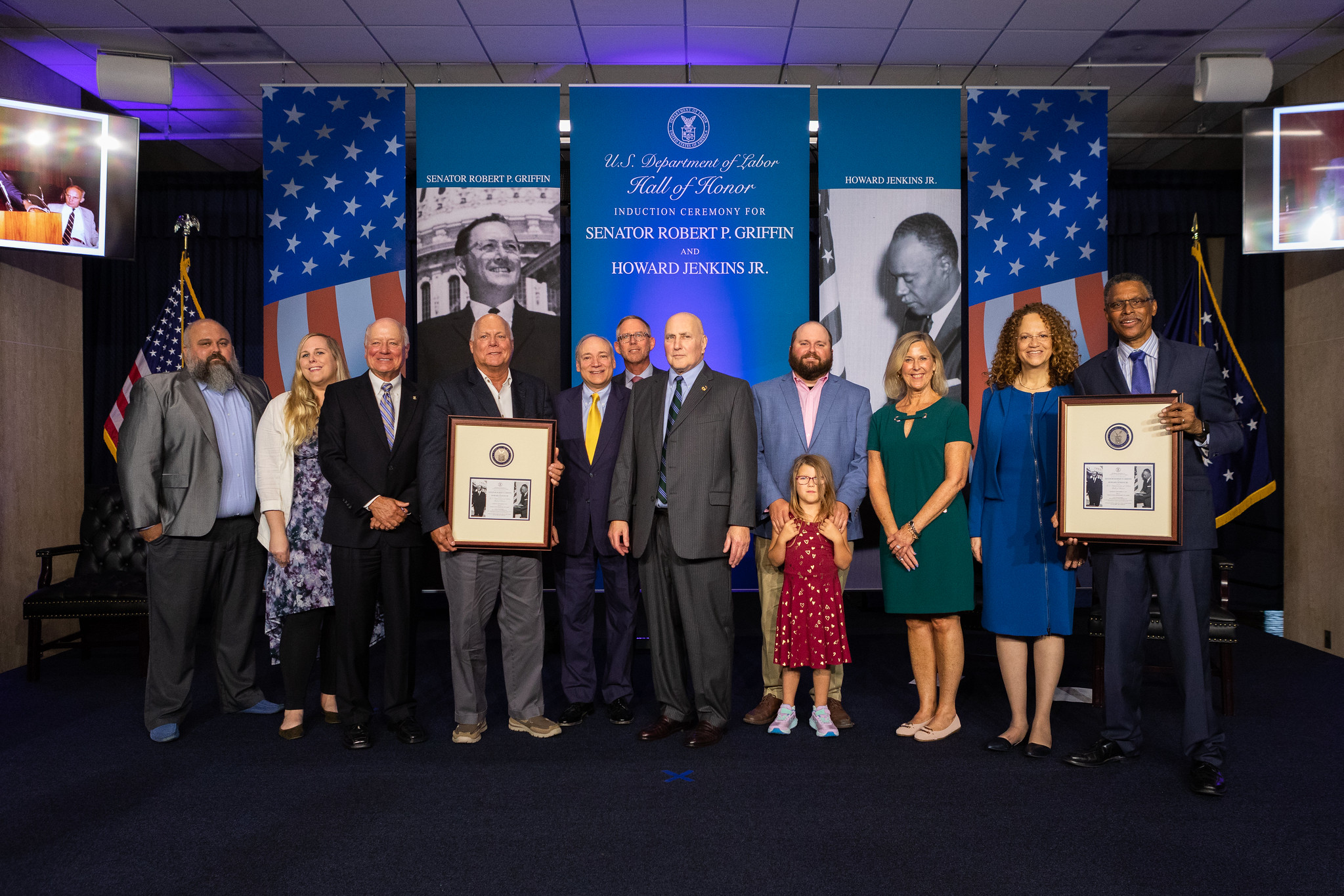 On September 26, 2019, in celebration of the 60th anniversary of the landmark Labor-Management Reporting and Disclosure Act of 1959 (LMRDA), the U.S. Department of Labor inducted former U.S. Senator Robert Griffin and former National Labor Relations Board (NLRB) member Howard Jenkins, Jr. into the Department's Hall of Honor.

"Robert Griffin and Howard Jenkins, Jr.'s work on the LMRDA protects members of America's unions and holds union leaders accountable," then-Acting Secretary Pizzella said. "As we celebrate the 60th anniversary of the LMRDA, it's important to recognize two of the biggest contributors to this landmark piece of legislation."

The two men’s names and stories were added to the Department’s Hall of Honor display in the lobby of the Frances Perkins Building in Washington D.C., which is an honor afforded only to a select few who have made substantial contributions to our country and our national workforce.

The Department held an induction ceremony, presided over by then-Acting Secretary Patrick Pizzella. Many OLMS staff based in Washington were able to attend alongside members of the public and influential leaders throughout the Department and the wider government.

OLMS Director Arthur Rosenfeld provided general remarks on the history of the LMRDA and its place within the broader history of the labor movement and U.S. labor law. As part of the ceremony, then-Acting Secretary Pizzella and Director Rosenfeld also presented commemorative plaques to the Jenkins and Griffin families.

Robert Paul Griffin was born November 6, 1923, in Detroit, Michigan. The son of an auto factory foreman, Griffin spent his youth working on auto assembly lines. He served in the U.S. Army during World War II from 1943-1946 before graduating from Central Michigan University in 1947. He went on to earn his law degree from the University of Michigan in 1950. Griffin practiced law in Traverse City, Michigan until his election to the U.S. House of Representatives as the representative for Michigan's Ninth Congressional District in 1956.

During Griffin's time in the House, national concerns arose about union corruption and organized crime as the result of highly publicized hearings in the Senate's "McClellan Committee on Improper Activities in Labor and Management." The McClellan Committee's findings prompted a call for congressional action. Griffin worked across the aisle with a fellow member of the Education and Labor Committee, Representative Phil Landrum (GA). Legislation introduced by Griffin and Landrum gained widespread support on Capitol Hill and from the Eisenhower Administration. The LMRDA, also referred to as the Landrum-Griffin Act, was signed into law on September 14, 1959. This landmark legislation promotes democracy and combats corruption within unions through requirements such as annual public financial disclosures and periodic secret ballot elections.

Griffin served five terms in the House of Representatives prior to his appointment to a vacant U.S. Senate seat in 1966. He won reelection to the seat in 1972. From 1966 to 1968, Griffin sat on the Senate Committee on Labor and Public Welfare, the authorizing Committee of the LMRDA and the predecessor to the current Senate Committee on Health, Education, Labor and Pensions. From 1969-1977, Griffin served as the Senate Minority Whip. Following his time in the Senate, he returned to Traverse City to practice law until his election to the Michigan Supreme Court in 1986. He served on the Court until his retirement in 1994. He died in 2015 and was 91 years old.

At the ceremony, Robert Griffin was represented by his son, Sixth Circuit Judge Richard Griffin. Richard Griffin shared anecdotes about his father’s early days, relationship with his wife Marge, and long career in public service.

The glimpse into the life of Robert Griffin was enough for everyone present to conclude that, even though his own father — a Pontiac plant foreman — considered him a failure when it came to fixing cars, Robert Griffin was an accomplished statesman and admirable person.

Howard Jenkins, Jr. was born in Denver, Colorado in 1915. He attended the University of Denver for both undergraduate (1936) and law school (1941). During World War II, Jenkins worked for the Denver War Production Board before his appointment as the Regional Attorney for the National War Labor Board in 1943. In 1945, he became the Chief Regional Enforcement Officer at the National Wage Stabilization Board working under then-Chairman W. Willard Wirtz. From 1946-1956, Jenkins served on the faculty of Howard University's Law School, focusing on labor law and administrative law.

President John F. Kennedy appointed Jenkins to the National Labor Relations Board in 1963. Jenkins, the first African American to serve as Board Member at the NLRB, was sworn in on August 28, 1963, the day after the civil rights march on Washington, D.C. Jenkins was later reappointed to the Board by Presidents Lyndon Johnson, Richard Nixon and Jimmy Carter, and served as a board member for 20 years. Among his most notable contributions to the development of our nation's labor law, Jenkins helped establish the board's policy of refusing to help labor organizations that practiced racial discrimination. He passed away in 2003 at the age of 87.

Jenkins’ son Lawrence Jenkins represented him at the ceremony. Lawrence Jenkins, a hospital chaplain in the Washington D.C. area, shared his memories of and experiences with his father. He emphasized that his father felt a responsibility to set an example in how he lived his life as a black professional. Lawrence Jenkins mentioned that this extended to how sharply his father dressed and said he never even saw his father wear jeans.

The remarks painted a picture of Howard Jenkins Jr. as a hard-working man who was devoted to the public interest and fully aware that he was a pioneer whose numerous personal accomplishments held a great deal of importance for those who would come after him.