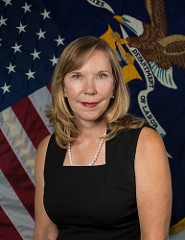 Julia K. Hearthway is serving as the Director of the Office of Workers' Compensation Programs. She joins the agency from the Commonwealth Court of Pennsylvania where she served an appointed judicial term. She was involved with state administrative law matters and court rulings pertaining to a variety of issues including, but not limited to, the following: banking, insurance, taxation, public utilities, labor practices, government procurement and contract issues, workers' compensation, unemployment compensation, professional and occupational licensing, and zoning and land use.

Prior to her appointment with the Commonwealth Court of Pennsylvania, Ms. Hearthway was the President and CEO of The Hearthway Group, a consulting firm providing services to government and business with a focus on developing effective interactions between the public and private sectors. Client assistance included 1) visionary policy development; 2) effective strategy implementation; and 3) full stakeholder engagement and support. The firm's areas of concentration included economic and talent workforce development, workers' compensation, and labor-management relations.

Previously, from 2011-2015, Ms. Hearthway served as Secretary of the Pennsylvania Department of Labor & Industry, the fifth largest state agency with over 5,000 Employees, 150 offices and an annual operating budget in excess of $1.2 billion. Her responsibilities included oversight of unemployment compensation taxes, benefits and adjudication; oversight of the State Workers' Insurance Fund (SWIF) and workers' compensation benefits and adjudication; administration of the state's training and workforce development programs; administration of vocational rehabilitation services for individuals with disabilities; and enforcement of labor-related laws and workplace safety standards. She was also instrumental in a number of legislative reforms, including the landmark passage of Acts 6 and 60 to the unemployment compensation system, Act 184 reform to the workers' compensation prescription system, and Act 151 reform to the child labor law.

Prior to her nomination, Ms. Hearthway served as a prosecutor in the Pennsylvania Office of the Attorney General from 1993-2011. Hearthway rose through the ranks of the criminal division. In 2001, she was promoted to Chief of the Insurance Fraud Section. Responsibilities included directing and handling a significant number of complex multi-million dollar fraud scams that frequently involved proactive undercover operations, the use of state-wide investigative grand juries, and multi-jurisdictional cooperation. From 1990-1992, she was an associate at the law firm of Hamburg, Rubin, Mullin & Maxwell, where she concentrated on civil construction litigation. From 1986-1990, she was an assistant district attorney for the Montgomery County District Attorney's Office, and from 1985-1986, she clerked for the Honorable Paul W. Tressler.