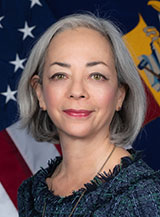 Thea Lee was named Deputy Undersecretary for International Affairs on May 10, 2021. She has been advocating for workers’ rights, both domestically and internationally, for over thirty years. She was president of the Economic Policy Institute, a progressive pro-worker Washington think tank, from January 2018 to May 2021 and an international trade economist at EPI in the 1990s. From 1997 to 2017, Lee worked at the AFL-CIO, a voluntary federation of 56 national and international labor unions that represent 12.5 million working men and women. At the AFL-CIO, she served as deputy chief of staff, policy director, and chief international economist.

Lee has served on the State Department Advisory Committee on International Economic Policy, the Export-Import Bank Advisory Committee, and on the Boards of Directors of the National Bureau of Economic Research, the Congressional Progressive Caucus Center, the Center for International Policy, and the Coalition on Human Needs, among others. She served on the U.S.-China Economic and Security Review Commission from 2018 to 2020. In 2022, she was appointed to the Congressional-Executive Committee on China.