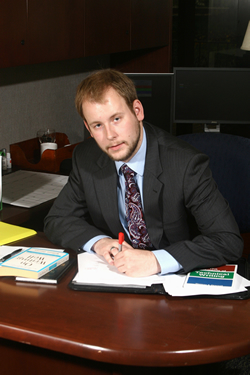 Clearly, the ability to communicate effectively is critical to the U.S. Department of Homeland Security's mission to protect the American people. Bogdan "Bob" Vitas's job is to help it do so. As a Technical Writer at DHS's facility in Arlington, Virginia, Bob's job entails communicating complex concepts in a variety of formats for a range of audiences. He also manages documentation processes for his office and develops policies and standards for good writing.

"I love the work that I do, because I never know what to expect," Bob says. "I help different teams present information in a logical way, focusing on language, and on any given day the topic might be very different."

Bob's path to DHS started in 2009, when he applied for the Workforce Recruitment Program (WRP), which connects federal and private sector employers to qualified and pre-screened college students and recent graduates with disabilities. Bob found out about the WRP from the Director of Disability Support Services at American University (AU), where he was studying International Relations and Literature. After interviewing with a WRP recruiter, he received two calls about potential internships, one with the U.S. Agency for International Development (USAID) and one with the U.S. Department of Labor (DOL). He was offered, and over time was able to pursue both opportunities.

During Fall 2009, he interned at USAID's Bureau of Legislative and Public Affairs, where he had a variety of writing and editorial responsibilities, including attending hearings on Capitol Hill and drafting legislative reports on meetings of the Senate Foreign Relations Committee. He also managed scheduling logistics and provided other general administrative support, including budgetary tasks.

Then, in Spring 2010 — conveniently just as he was about to graduate — DOL contacted Bob again, this time about a job with its Bureau of International Labor Affairs (ILAB). He started that summer. While at ILAB, he researched efforts by foreign governments to reduce child labor, forced labor, and human trafficking and assisted in writing and editing related reports and publications. The experience offered a chance to put to use not only his education, but also his language skills and personal experiences; Bob's work at ILAB focused on Eastern Europe, where he lived during a significant portion of his childhood.

Personal experiences throughout his young life also account for Bob's interest in communication on a broader level than just writing. He was born hearing impaired, lost additional hearing during his second year of college and later developed tinnitus, a condition commonly described as constant noise or ringing in the ear. As a result, he feels he thinks about language and how people receive and process information to a deeper extent than others. Today, this insight, coupled with his education and skills, plays an important role in communicating issues of critical importance to the nation.