At work, it's what people CAN do that matters. That's the simple message behind the Campaign for Disability Employment (CDE), an ODEP-funded outreach effort to promote the hiring, retention, and advancement of people with disabilities.

The CDE is a collaborative of several leading disability and business organizations convened by ODEP to work together to address disability employment. The outcome of this collaboration is a national outreach initiative titled "What can YOU do?" Framed around messages developed collectively by the CDE's Members, this initiative challenges common misconceptions about disability employment and encourages employers and others to recognize the value and talent that people with disabilities add to America's workplaces and economy.

Key parts of the What can YOU do? initiative are the "Working Works", "Who I Am", "Because", and "I Can" public service announcements (PSAs). Each highlights what people with disabilities CAN do when given the opportunity. The CDE has developed outreach materials to complement the PSAs, including posters and discussion guides created for co-workers, youth, health care professionals, and other audiences. Spanish-language versions of selected materials are also available. 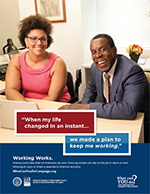 The campaign’s latest PSA, “Working Works,” launched in October 2018. Through the voices of several individuals, it explores the many reasons people work, including after injury or illness.

The PSA’s four primary cast members include Major League Baseball great Cal Ripken Jr. and three other individuals who worked with their employers and health care providers to make a plan to stay at or return to work following illness or injury. Their stories emphasize the importance of working together on effective stay-at-work/return-to-work strategies—for the benefit of individuals, families, employers, and the nation’s economy. 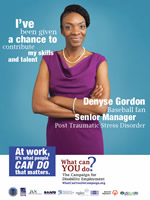 The "Who I Am" PSA debuted at the White House in October 2014 and has aired more than 175,000 times on television stations and cable outlets nationwide. It is available online and for mail order on an accessible talking menu DVD.

"Who I Am" features nine real people with disabilities. Rather than be defined by disability, these individuals are the sum of their many life roles — which includes working in jobs they love. The message of "Who I Am" is to remind us to see one another for who we are and what we can contribute. 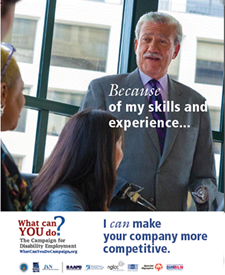 "Because" — Celebrating the power of youth influencers

The "Because" Campaign, which includes the "Because" PSA, posters and discussion guides, was released in January 2013. Since then, it has aired more than 112,000 times on television and cable stations nationwide, at the Indianapolis 500 automobile race, on electronic billboards alongside interstate highways, and many meetings, conferences, and presentations. "Because" reflects ODEP's work around youth with disabilities, and the important roles that parents, teachers, coaches, mentors, and future employers play in shaping the career aspirations of youth with disabilities. Together, "Because" and "Who I Am" have been ranked in the top 1% of all PSAs as reported by Nielsen Media Research. 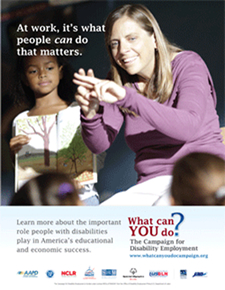 The "I Can" PSA earned more than $25 million in donated ad space on television, cable, and radio stations nationwide and in AMC movie theaters. Released in 2010, "I Can" was the Campaign for Disability Employment's first PSA. It demonstrated what people with disabilities can do at work and urged employers to capitalize on these talents through inclusive employment practices that benefit everyone.

The CDE is steered by a group of leading business and disability advocacy organizations. Members include: