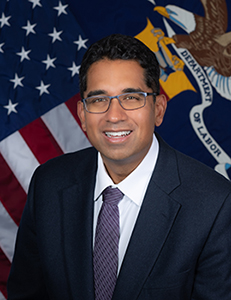 Patrick Oakford is the Principal Deputy Assistant Secretary in the Office of the Assistant Secretary for Policy (OASP). Patrick has spent his career working in government and the nonprofit sector advancing policies to improve labor protections and economic outcomes of low- and middle-income families. He previously worked at the U.S. Department of Labor under Secretary Perez as a Policy Advisor in the Office of the Chief Economist. He also worked in New York state government as a Senior Policy Advisor. Patrick previously held research positions at the Center for American Progress and with the Georgetown Center on Poverty and Inequality, among other organizations. His research has been covered by broadcast, radio and print media, including The New York Times, The Washington Post, Bloomberg, PBS NewsHour, and NPR, among others. Patrick received a B.S. in Industrial and Labor Relations from Cornell University and an M.Sc. in Migration Studies from the University of Oxford.

Laura Dawkins is the Deputy Assistant Secretary for Policy in the Office of the Assistant Secretary for Policy (OASP). Prior to this, she served as Director of OASP’s Office of Regulatory and Programmatic Policy and as Director of the Policy and Integrity Division of DOL's Office of Foreign Labor Certification. Before joining DOL, Ms. Dawkins held various positions at the Departments of Justice and Homeland Security where she developed and managed humanitarian and family-based immigration programs, and served as the Chief Regulatory Coordinator for U.S. Citizenship and Immigration Services. She received her B.A. from the University of Wisconsin and J.D. from the George Washington University Law School. 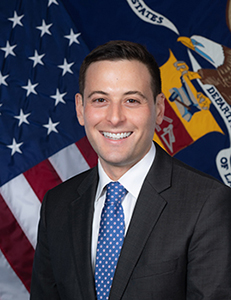 Alexander Hertel-Fernandez is Deputy Assistant Secretary for Research and Evaluation in the Office of the Assistant Secretary for Policy (OASP). Alexander is on leave from Columbia University, where he is an associate professor of public affairs. His teaching and research has focused on labor relations and the workplace, the policymaking process, and U.S. political economy. Alexander also co-founded the Columbia Labor Lab, an interdisciplinary team of social scientists studying worker voice and collective action. His recent academic and policy research has focused on workers' knowledge of rights and access to workplace information, civic engagement in the workplace, and worker organization and collective action in the COVID-19 crisis. He is the author or co-author of three books in addition to scholarly articles, and the recipient of fellowships and grants from the National Science Foundation, the Hewlett Foundation, the Russell Sage Foundation, and the Washington Center for Equitable Growth. Alexander received his BA in political science from Northwestern University and MA and PhD in government and social policy from Harvard University.

Cassandra Robertson is the Chief of Staff to the Assistant Secretary of Policy. She was previously the Policy Director of the New Practice Lab at New America, where her work focused on policy implementation at the state and local level. Prior to this, she was a Fellow at the Cornell Population Center, where she researched inequality and economic mobility. She also served as a Fellow in the Office of Senator Cory Booker and as a Fellow with the Office of the Assistant Secretary of Planning and Evaluation at the Department of Health and Human Services. Her writing has been published in both peer-reviewed and popular outlets, including the New York Times, The New Republic, and The American Prospect. She holds a PhD in Sociology from Harvard University.

Albert (Al) Herrera is the Director of the Office of Regulatory and Programmatic Policy in the Office of the Assistant Secretary for Policy (OASP). Prior to this, Al served as the Acting Senior Advisor to the OASP Deputy Assistant Secretary for Policy and as the Deputy Administrator and Acting Administrator of DOL’s Office of Foreign Labor Certification. Before joining DOL, Al held various leadership positions in the U.S. Departments of Justice, Homeland Security, and Office of Management and Budget managing national security, anti-fraud, immigration, regulatory, and budgetary matters throughout the United States.

During his career, Al has been recognized by the Departments of State, Labor, Homeland Security, and the Federal Bureau of Investigation for his leadership and service to the public. Al has Bachelor of Arts degrees in Criminal Justice and Psychology from New Mexico State University and is a graduate of the Office of Personnel Management’s Federal Executive Institute Leadership Program and has served as a White House Fellow in the OMB’s Office of Federal Financial Management.

Christina Yancey, Ph.D., is the Chief Evaluation Officer for the U.S. Department of Labor. As the Chief Evaluation Officer, she is responsible for coordinating the Department's evaluation agenda and working with all agencies to design and implement evaluations. Dr. Yancey has over 15 years of experience in overseeing and conducting research on employment and other social policies and programs, and in working with policy makers and practitioners to build and apply evidence. Prior to joining DOL in 2014, Dr. Yancey served in the Department of Justice’s Office of Justice Programs, coordinating performance management and strategic planning activities for the agency. In the years prior to federal service, Dr. Yancey developed, coordinated, and directed field-based evaluations of social programs, primarily for the state of Maryland. She holds a Ph.D. from the School of Public Affairs at American University and a Master of Arts in Criminology from the University of Maryland, College Park.

Scott Gibbons has served as the Chief Data Officer since March 2019. In that role, he provides oversight and leadership for the U.S. Department of Labor’s (DOL) efforts to develop, maintain, share and utilize data to best support DOL’s mission. He leads the Data Board, which serves as the Department’s data governance body, and oversees the development and establishment of coordinated Department-wide positions on data governance, strategy, quality and the management of data as a strategic asset.

Prior to this, Gibbons has worked in various analytical and statistical capacities for the Department of Labor for more than 20 years. He most recently served as Program Manager for Data Analytics for the Chief Evaluation Office at DOL. In this capacity, he led projects assessing and improving data quality and raising the capacity of staff to use data to inform program administration. Prior to that, he was a Supervisory Statistician with the Bureau of Labor Statistics, and the Employment and Training Administration. He holds a Bachelor of Science in Biology from the University of Maryland and has a master's degree in biology from American University.

S. Marisela Douglass serves as Director, Office of Compliance Initiatives, at the U.S. Department of Labor. As Director, she provides leadership and support to the Department's enforcement agencies, advancing the expansion and development of innovative approaches to compliance assistance and enforcement.

Douglass’ career includes more than 15 years in public service. She previously served as Chief, Office of Program Policy Evaluation, at the Mine Safety and Health Administration (MSHA). She also worked as an audit manager at the U.S. Department of Labor’s Office of Inspector General where she led audits of MSHA, the Employment and Training Administration, and the Bureau of International Labor Affairs. Prior to her career at the U.S. Department of Labor, Douglass worked as a consultant at Deloitte and in quality assurance at the American Red Cross.

Douglass holds a Bachelor of Arts in Political Science from Rutgers College where she was a Henry Rutgers Scholar and has a Master of Public Administration from Cornell University.

Katelyn Walker Mooney is the Director of the Department of Labor’s Good Jobs Initiative and serves as an Advisor to Secretary Walsh. In this role she coordinates work done since the beginning of this administration—and often for decades before—under one umbrella to provide critical information to workers, employers, and government agencies as they work to improve job quality. She recently served as the Associate General Counsel for the Committee on Education and Labor in the U.S. House of Representatives. There, she managed the legislative process; counseled Representatives and staff on labor policy, legislation, and law; and conducted oversight investigations. Before that, she clerked for the Honorable Melanie M. Shaw Geter in the Maryland Court of Special Appeals and the Honorable Tiffany H. Anderson in the Circuit Court for Prince George’s County. As a law student, she worked for Congresswoman Marcia L. Fudge, the AFL-CIO, and the SEIU. Katelyn is an alumna of the George Washington University Law School and Dartmouth College. 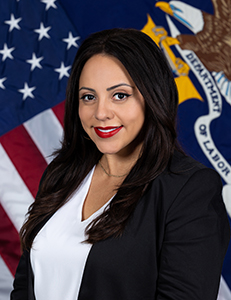 Teresa Acuña serves as senior policy advisor with the Office of the Assistant Secretary for Policy and Deputy Director of the Good Jobs Initiative. Previously, Teresa worked as Associate Director for Democratic Governance at the Ash Center, a multi-disciplinary think tank leading real-world change at Harvard Kennedy School. For over ten years, Teresa held various political, legislative, and programmatic leadership roles in the U.S. House of Representatives and California State Legislature. She led teams in addressing economic inequality, exploring the future of work, and creating democratic governance innovations through an intersectional lens. Teresa holds a master’s degree in public administration from Harvard Kennedy School, where she was the Roy and Lila Ash Fellow and Sheila C. Johnson Leadership Fellow. She is a proud daughter of immigrants and raised in a union home. 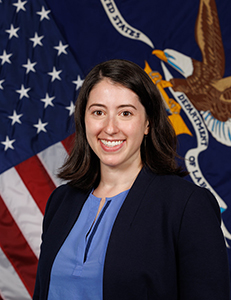 Diana Boesch is a Policy Advisor in the Office of the Assistant Secretary for Policy. Previously, Diana was a Policy Analyst at the Center for American Progress on the Women’s Initiative, where she focused on women’s economic security and work-family policies. Before her work at CAP, Diana spent time at the National Partnership for Women & Families; the Minnesota Coalition Against Sexual Assault; the Center on Women, Gender, and Public Policy at the University of Minnesota; and FSG, a mission-driven consulting firm. Diana received her master’s degree in public policy from the Humphrey School of Public Affairs at the University of Minnesota and her undergraduate degree from Whitman College. 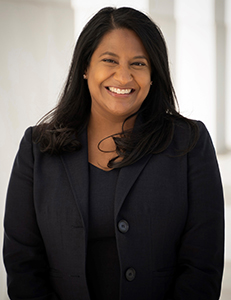 Rukku Singla is a Policy Advisor for the Good Jobs Initiative, in the Office of the Assistant Secretary for Policy. Previously, Rukku was the head of policy for Douglas Emhoff, Second Gentleman of the United States. Before that, she was the Special Assistant to Chair Catherine E. Lhamon at the U.S. Commission on Civil Rights. Prior to joining the Commission, Rukku served as Associate Counsel for Presidential Personnel at the Obama White House and was an Associate Attorney at Jenner & Block LLP. Rukku clerked for the Hon. Andre Davis of the U.S. Court of Appeals for the Fourth Circuit and the Hon. James G. Carr of the U.S. District Court for the Northern District of Ohio. She earned her J.D. from the University of Michigan Law School and her B.A. from The Ohio State University.