Abstract:  California's first in the nation paid family leave law came into effect 10 years ago – on July 1, 2004. What have we learned in the ensuing decade, and what are the implications for future paid leave laws, whether in other states or at the federal level? 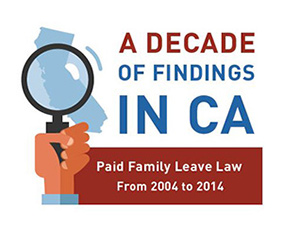 California’s paid family leave statute (CA-PFL) was passed in 2002 and took effect July 1, 2004. It is financed through a payroll tax levied on employees and was added to the pre-existing Temporary Disability Insurance (TDI) program that typically provides mothers with six weeks of paid leave during or just after pregnancy. Under CA-PFL, new mothers and fathers can take up to six weeks of paid leave to bond with their child (for mothers, this is in addition to the six weeks they can take under TDI); CA-PFL leave can also be used by employees with a sick, child, spouse (or domestic partner), or parent.

In the ensuing decade, three other states have followed California’s example. In July 2009, New Jersey began a "family leave insurance" program, which is also added to the state's TDI system and is quite similar to CA-PFL. New Jersey's program offers six weeks of paid leave at a 66 percent replacement rate, although with a considerably lower ($595 per week in 2014) maximum benefit (Department of Labor and Workforce Development, 2014). Since January 5, 2014, Rhode Island's "temporary caregiver's insurance" program has provided four weeks of paid leave at a 3 60 percent wage replacement rate, up to a ceiling of $752 per week. As with California and New Jersey, Rhode Island’s program is coordinated through the state's TDI program; however, job protection is also provided during the leave period. Washington state approved $250 per week in PFL benefits to be provided for five weeks, with the program scheduled to begin in 2009 (Progressive States Network, 2010); however, due to budgetary pressures, implementation has been repeatedly postponed and is now not scheduled until 2015 (Employment Security Department, 2013).

PFL has also attracted interest at the national level. In his 2011 budget, President Obama proposed (unsuccessfully) to allocate $50 million in competitive grants to states that start PFL programs. There have also been increasing efforts to enact legislation to establish a national paid leave program.

Despite the growth over time in use of the program, Appelbaum and Milkman (2011) indicate that about half (51.4 percent) of California workers they surveyed in 2009 and 2010 were unaware of it, and these individuals were most likely to have the greatest potential need (younger respondents, non-Whites, those with less education or household income, and those without employer-based paid leave benefits). Moreover, a third of those who knew about the program did not apply for the benefits because the wage replacement was too low. Others did not take paid leave because they either thought they were not eligible or feared their employer would be unhappy, limiting future potential advancement, or even resulting in employment termination.

Financing for California's PFL program comes exclusively from employee payroll taxes, so there are no direct costs to employers in terms of funding the paid leave. However, employers with workers on leave might face other costs, such as having to hire a replacement worker to temporarily cover work. This might be particularly challenging for small employers. Companies might also face problems if their employees take leave for reasons not intended under the law. At the same time, a PFL law might also yield benefits to employers if, for example, employees who have the opportunity to take a paid leave are more likely to return to their jobs rather than quitting them. The availability of paid leave might also enhance employee productivity, loyalty, and morale.

What do we know about how these types of effects have played out in California? Appelbaum and Milkman (2011, 2013) surveyed approximately 250 California firms in 2010 about their experiences with the PFL law. They also conducted more in-depth interviews at 20 firms. Roughly 90 percent of firms in their survey said the law had either a positive effect or no effect on productivity, profit, morale, and costs. A similar proportion (nearly 90 percent) said they had not experienced any problems with employees taking leave for reasons not intended under the law. And, perhaps surprisingly, small firms reported even fewer problems than large firms.

Appelbaum and Milkman (2011, 2013), in both their survey and their in-depth interviews, asked employers how they managed while a worker was out on leave. This is not a new issue since some workers would have been on leave even without PFL (e.g. using TDI). However, with leave-taking being more common under PFL, the challenge might arise more often or last longer. They found that, most commonly, employers assigned work temporarily to other employees (this was the case in about two-thirds of firms); less frequently, employers hired temporary replacements (this was the case in less than one-third of firms).

Appelbaum and Milkman’s (2011, 2013) findings from California are generally consistent with results from national surveys of employer experiences with family leave laws. Three national surveys of employers have been conducted post-FMLA. The most recent, in 2012, found that fewer than 10 percent of employers reported problems with productivity, absenteeism, turnover, profitability, career advancement, or morale; small employers were less likely to report problems than were large employers (Klerman et al., 2012).

A common limitation of the research to date on family leave and employers is that for the most part it relies on cross-sectional surveys of employer attitudes. Future research could shed more light on employer effects by using difference-in-difference designs to compare changes in outcomes for employers in states implementing PFL laws with changes in outcomes for employers in similar states not implementing such laws.

As of this writing, two other states (New Jersey and Rhode Island) have implemented PFL laws similar to California’s, while one additional state (Washington) has passed legislation that has not yet been implemented. Several other states and Congress are considering further legislation in this area. The results from California’s first decade of PFL suggest that such laws can be a win-win—providing welcome support for employees and their families, without posing an undue burden on employers. While there is more for us to learn about the longer-run effects of California’s landmark law, we know enough now to conclude that it has successfully met its objectives and provides useful lessons for the rest of the nation.