Abstract:  This report provides new evidence on Rhode Island's Temporary Caregiver Insurance (TCI) law, which took effect in January 2014, based on a survey of small and medium-sized businesses in the food services and manufacturing sectors in Rhode Island, Connecticut, and Massachusetts that we carried out in December 2013 (just before the law came into effect) and in January/February 2015 (one year after the law came into effect). We collected information about firm characteristics and productivity, employee life events and work flow, and employerprovided benefits. Comparing Rhode Island employers pre-and post-law to Massachusetts and Connecticut employers over the same time period, we found little evidence of significant impacts of the law on employers (although we note that the sample size for these estimates was small; 104 employers in Rhode Island, and 133 in the other two states combined). We also asked Rhode Island employers directly about their views towards TCI one year after it came into effect and found that a majority of the 213 Rhode Island employers interviewed in 2015 support the new law. Thus, our results suggest that laws like Rhode Island's TCI may not have significant impacts on small and medium-sized employers and could garner support by such employers once they have experienced them. 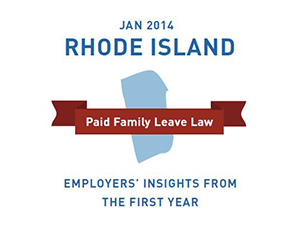 In January 2014, Rhode Island became the third state in the nation (after California and New Jersey) to implement a paid family leave law. Rhode Island’s law, the Temporary Caregiver Insurance (TCI) Act, provides up to four weeks of paid leave to employees who need to take time off work to bond with a newborn, adopted child, or foster child or to take care of a seriously ill child, spouse, partner, parent, parent-in-law, or grandparent. Funded through payroll contributions by employees, TCI leave is job-protected and paid as a percentage of the employee's prior earnings, with a maximum benefit that is $795/week as of December 2015.

As other states around the nation consider similar laws, an open question is what impact these types of programs might have on employers, and particularly small businesses, which sometimes are exempt from such legislation (as is the case, for example, with the federal Family and Medical Leave Act, FMLA). How are these firms affected by paid family leave legislation? And how do they view such laws?

To answer these questions, we surveyed a sample of small and medium-sized businesses with 10-99 employees in Rhode Island, both before and after the TCI law came into effect. We focusedon small and medium-sized firms because less is known about their experiences with paid leave and because they might face more challenges dealing with employee absences than would larger firms. We focused on firms in two specific sectors, food services and manufacturing, because these sectors contain relatively large numbers of small and medium-sized employers in our treatment and comparison states. Our before- and after-design provides evidence on whether any outcomes changed for firms after the implementation of RI's law in January 2014. Since other factors may have changed over that time period as well, we also surveyed firms in two "control" states (Massachusetts and Connecticut). These states are adjacent to Rhode Island, and have similar labor markets and demographics, and thus provide information about how outcomes might have changed during this time period for Rhode Island firms in the absence of the law.

This report provides a brief overview of our data and methods, and main results. We provide further information about our survey instrument in Appendix 1 and about our sample and survey methods in Appendix 2.

At baseline (December 2013), we surveyed a representative sample of food service and manufacturing establishments with 10-99 employees. The sample was drawn from Rhode Island and neighboring counties in Massachusetts (Worcester, Norfolk, Bristol, and Barnstable) and Connecticut (New London, Windham, Tolland, and Middlesex). A total of 414 establishments responded (212 in Rhode Island, 155 in Massachusetts, and 47 in Connecticut); this represents an 11% completion rate (i.e. 414 establishments out of a total of 3776 attempted).

Our survey covered four major domains: characteristics of firms and their reports of productivity and related metrics; employee life events and work flow; company benefits and policies; and, for Rhode Island firms in the follow-up survey, views toward TCI (see Appendix 2 for details).

Unless otherwise noted, our analyses focus on the panel of firms present at both baseline and follow-up (N=237; 102 in Rhode Island and 130 in Massachusetts and Connecticut; sample size for specific questions is lower, ranging from 202 to 232, due to item non-response). We looked at changes over time for employers in Rhode Island, as compared to employers in the other states. Overall, as detailed below, we found few significant effects of TCI on employers in Rhode Island.

Characteristics of firms and reported productivity and related metrics

Our sample included small and medium-sized firms. In Rhode Island, one third of the sample had 10 to 19 employees, about 45% had 20 to 49 employees, and 22% had 50 to 99 employees. Overall, two-thirds of the firms were from the manufacturing sector, with the remaining onethird from food services (and these distributions did not vary substantially by firm size). The distributions in the two control states were similar, and there were no significant changes over time (or differences across states in changes) in firm characteristics.

We did not find any significant changes over time (or differences across states in changes) in employers' reports about productivity or related metrics such as their perceptions of employee morale, cooperation, or attendance, although we note that our relatively small sample sizes limit the statistical power to detect such differences.

Very few respondents were able to tell us about the last female employee at their firm who had a child and how that event was handled. Among those who did (a total of 56 in Rhode Island, and 71 in the other two states), we did not find significant changes over time (or differences across states in changes).

Overall, we did not find significant differences in company benefits and policies comparing the change over time among Rhode Island employers with the change among employers in the other two states.

We asked all the Rhode Island firms in our sample in 2015 (N=223 (102 present at both survey waves, and 121 added at follow-up wave), of which 213 responded to this question) about their views of the TCI program. A majority (61%) of these Rhode Island employers - surveyed in early 2015, one year after the law came into effect - said they were either strongly or somewhat in favor of the TCI program (Figure 1). An additional 15% said they were neither in favor nor opposed, leaving just under one-quarter (24%) who either somewhat or strongly opposed the program.

Asking RI employers directly about their views on the TCI program one year after it took effect, we found that a majority (61%) favor TCI (with 15% neutral, and 24% opposed). Support was more widespread among the larger firms (those with 50-99 employees), but even in the smaller firms in our sample (those with 10-19 employees, or 20-49), a majority favored the program.

These results are broadly consistent with those from prior research by Ruth Milkman and Eileen Appelbaum (2013) in California, the first state to implement paid family leave (see also Bartel et al., 2014 for a review of research on California’s law). Milkman and Appelbaum (2013) found that California’s paid family leave program had few significant effects on employers and our results are consistent with those findings. Importantly, our results from Rhode Island are also suggestive of employer support for paid family leave laws. At a time when additional states are considering such policies, this is surely good news.