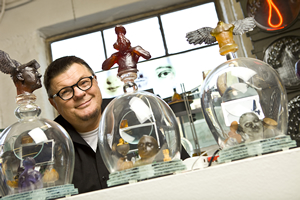 What would you do if you had one year to live? As a question, it's almost cliché. Yet it's something Tim Tate was forced to ponder when, more than two decades ago, he was diagnosed as HIV positive and told he would die within one year. He defied the prediction, but contemplated its inherent question.

At the time, Tim was working as a family therapist, but felt compelled to leave behind some kind of legacy, especially for his young niece and nephew. So he signed up for evening glass art lessons. He learned quickly, and soon dedicated himself to glass full time, through both teaching and his own sculpting.

After about 10 years, his doctors stopped repeating their annual prediction, Tim says. By that time he had already ensured his legacy — not only to his family, but also to the thousands of people around the world who have benefitted from his instruction and viewed his sculptures. In June 2001, Tim co-founded the Washington Glass School in Mt. Rainier, Maryland, located just over the Washington, D.C. border. Today it is the second largest warm glass school in the country, having served more than 4,000 students since its opening.

Tim's sculptures have been featured in exhibits in Berlin and London, and his work is in the permanent collections of several museums, including the Smithsonian Institution's American Art Museum and the Mint Museum. He also teaches workshops overseas and in the United States, including at the renowned Penland School of Crafts in the Blue Ridge Mountains of North Carolina.

Tim also creates commissioned pieces, including works for several public spaces in and around Washington, D.C., and won the international competition to create the New Orleans AIDS Monument, unveiled in 2008. Given the genesis of his life as an artist, the latter is especially important to him.