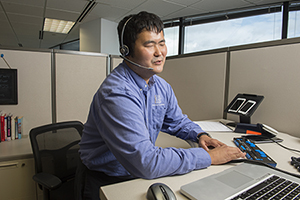 Technology has interested Sam Joehl nearly all of his life. Born blind, he first experienced its transformative power in second grade when his family got an Apple IIe computer, to which his father added a speech synthesizer and braille editor. "The computer was a world that really appealed to me," he recalls. "It was a world where I could function, where I felt like I really had control."

After college, where he studied computer information systems, Joehl worked in Chicago until an opportunity with SSB Bart Group (SSB), a digital accessibility company in Vienna, Va, opened up. At Joehl's previous job, the proprietary software that accommodated his disability impeded his efficiency, he said, and trying to make it more user-friendly started to interest him more than his actual job. Thus, he was a natural fit for SSB, where he now works as a principal technical consultant.

At work, Joehl uses screen reading technology (JAWS for Windows) with a refreshable braille display. Part of his job entails testing other screen readers that work on other platforms and testing accessibility features built into mobile devices. A "game-changing" tool he recently acquired is a new braille note taker that can run third-party applications.

The world of accessibility has changed dramatically over the years, but the most exciting transformation to Joehl is the cultural shift around disability. "When I first entered this field, you really didn't hear the word 'accessibility,'" he says. "Now it's more in the forefront." It's a marvel to him that devices like mobile phones can be purchased with accessibility features built right in and used straight out of the box without having to add costly assistive technology.

As accessibility features become more common, assistive technology vendors are being forced to push the innovation envelope in order to stay relevant, Joehl observes. "Now they have to figure out a way to do something better than the mainstream technology vendors do. It really is raising the bar."

Outside of work, Joehl's passion is being on a dragon boat racing team, the "Out of Sight Dragons," which practices on the Potomac River. What he likes most about it is that it's a team sport. "If you look at a lot of athletic opportunities for the visually impaired, they tend to be individual, even if you're on a team like bowling or wrestling," he says. "With this, it's a collective effort. And we're not racing against other teams with disabilities, we're racing against other teams. We're competing on an equal level with everybody else." In essence, Joehl's work is all about helping more people with disabilities be able to do the same.