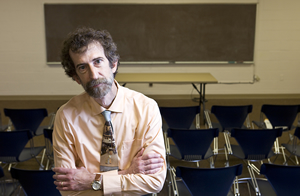 Most parents will tell you that raising children is the most rewarding job they've ever had — and also the hardest. As a family counselor and director of parenting education for a YMCA Youth & Family Services branch, Rob Guttenberg offers support, helping parents better navigate the complexities of family life and improve their capabilities and confidence.

Following undergraduate studies at Brown University, Rob earned a master's degree in counseling psychology from Bowie State College in 1979. Four years later, at age 29, he suffered a brain hemorrhage that resulted in severe physical and cognitive impairments. Initially, he was unable to walk, speak or write. With extensive rehabilitation, he regained those abilities, but with permanent physical and cognitive disabilities; he wears a leg brace and has left-side neglect, which causes significant short-term memory problems.

Rob was initially discouraged from returning to his counseling career following the hemorrhage. He disregarded the advice, but it wasn't an easy path, he says. He worked for the YMCA previously and wanted to do so again. There were aspects of the job he wasn't capable of performing, such as driving children in vans, but he convinced his employer that what he could do outweighed what he couldn't do. "I said just hire me, and what I'll do will overshadow that," he says.

A milestone was learning to drive again, which allowed him to work in various locations and resume counseling. Today, Rob works out of two offices and lectures in schools, libraries and other community centers throughout the Washington, D.C. area. A Diplomate in Adlerian Psychology, he has taught domestically and abroad, including a two-week course on music therapy in Lithuania. A performing songwriter, he also delivers disability-awareness workshops featuring original songs and compelling messages learned along his road to recovery.

On the road or in the office, several accommodations help Rob stay productive. To help with his short-term memory deficit, he uses a digital voice recorder to take notes, and voice-recognition software to document them. An employer-provided smart phone assists with scheduling. Because he has difficulty synthesizing written information, he also has staff assist with monthly and quarterly reporting requirements. In addition, his job itself has a lot of flexibility, allowing him to manage not only his disabilities, but also life as a parent himself.