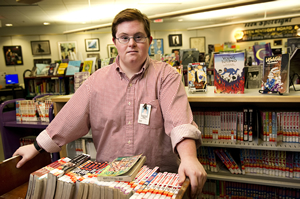 The bookworms of Arlington, Virginia have a friend in RJ Martin. A clerk in the circulation department at the Arlington Country Central Library, RJ works hard to ensure that new and returned books are put onto the shelves quickly and accurately. His specialty is the young adult section, which caters to teenagers and is a popular place to meet and study in the late afternoon when the high school across the street lets out for the day.

RJ, who has Down syndrome, enjoys keeping his section organized and helping the library run smoothly, although he admits that, like most people, one of his favorite things about his job is getting paid. He works part time, from 10 am to 3 pm, five days a week. He actually began working at the library as a volunteer in 1998, and obtained his competitively paid position in 2005. Prior to that, he worked at a local grocery store, so he was already familiar to many of the library's patrons.

According to RJ's supervisor, he is a model employee and sets a good example for all of the library's employees in terms of both punctuality and productivity. However, the most important attribute he brings to the job is his positivity, she says. "He never has a bad day. He always arrives with a smile. He never has a problem getting his work done, and he gets along with everyone."

Camaraderie with colleagues is something RJ enjoys off the clock as well. He and his supervisor occasionally enjoy lunch together at a local Japanese restaurant, although RJ also likes cooking at home in his apartment, where he lives independently. When not working, RJ takes acting lessons, and several of his co-workers have seen him perform, to rave reviews. He has also taken computer classes at the Arlington Career Center and plays basketball two nights a week. On the court, on the stage or in the stacks, RJ continually seeks new ways to benefit from — and contribute to — his local community.