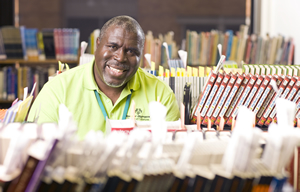 Ricardo Thornton works in a bookworm's natural habitat. A clerk at the Martin Luther King Jr. Memorial Library in Washington, D.C., he spends his days among books. Whether fiction or non-fiction, paperback or hardback, bestseller or literary unknown, chances are they have passed through Ricardo's hands.

Ricardo's main responsibilities include sorting, stamping and shelving books and other clerical duties. He likes working both independently and as part of the library's larger team, and takes great pride in ensuring that patrons are satisfied with the branch's service and collection. "If the public is happy, we're happy," he says with a smile.

Ricardo's success discredits common misconceptions about the skills of people with intellectual disabilities. He began by volunteering at the library as a young person 32 years ago, as part of a special education program. Ricardo enjoyed the experience and, working with a job coach, eventually gained the skills necessary to become a full-time paid employee. Even today, he continually seeks to expand his abilities; he is currently working on improving his computer skills.

Like a lot of library personnel, Ricardo himself loves to read, but doesn't have the time to do so as often as he'd like. Off the clock, he is an active advocate for people with intellectual disabilities, speaking about his experiences and serving as a role model, especially for young people. His message is, "If I can make it, so can you. Give it your best and the rest will follow. If you do that, you'll see yourself growing and growing every day."

An athlete and ambassador with Special Olympics, Ricardo has travelled as far as South Africa and Morocco. Closer to home, he has been an honored guest at the White House, where he and his family met former President Clinton. In addition to dedicated employee and advocate, Ricardo holds two other important positions — those of husband and father.