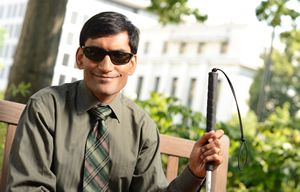 Rajiv Shah thrives on trouble — troubleshooting that is. As a computer specialist in the public affairs office at the U.S. Department of State, his primary responsibilities include providing computer help desk and technical assistance to employees who work in-house and telecommute.

Rajiv's day starts the minute he arrives, when he assesses the log of calls that came in the night before and whether the problems reported were resolved or require additional technical assistance from him. While he's attending to any outstanding issues Rajiv, who is blind, is essentially doing double duty by also answering additional calls for assistance in real time. During any down time, he works on projects such as maintaining the agency's user list. All in all, it makes for very busy and eventful days.

A self-proclaimed "people person," Rajiv enjoys working with his colleagues and helping them when they have problems with their computers or smart phones. He feels his degree in languages and his love of international affairs, along with a general "geek" mentality, make him well-suited for the job.

Rajiv uses screen reader technology on his work computer and smart phone to help him do his job more efficiently. He was also recently instrumental in helping his Department install a special computer program on its server for troubleshooting issues, which allows him to log in as a support technician from work or home. Even though this system is still in the trial phase, Rajiv says it is working "superbly" and anticipates it will become permanent, allowing him more job flexibility.

Rajiv obtained his position through the Schedule A hiring authority, which allows federal agencies to hire and/or promote people with disabilities without going through the regular competitive hiring process. Individuals are eligible for a Schedule A appointment if they have a severe physical or mental disability and meet the qualifications of the job.

Rajiv credits his parents, first and foremost, for giving him the encouragement he needed to achieve his employment success. "Without their guidance, I wouldn't have been as comfortable with who I am today and my disability," he says. "I've learned what I can and cannot do, and to know when to ask for help." In addition, Rajiv cites the help desk manager at his previous job, in another federal agency, as being instrumental in teaching him the skills he needed to succeed professionally.

Rajiv acknowledges that there are daily challenges in his job because of his disability, such as understanding what is being described over the phone visually and converting that information into something he can then respond to and fix—for instance, if someone has a different font size or color in their document or their e-mail is not formatting correctly. However, with effective communication, he is usually able to resolve problems quickly, and in fact relishes the challenge. "I've amazed myself in what I can do," Rajiv says. "If you don't challenge yourself, you won't really know if you can or cannot do the job."