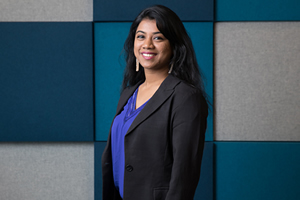 Nirath Seri knows a thing or two about adapting to new environments. Originally from India, she moved to the U.S. two years ago to attend graduate school at the University of Texas at Arlington, after receiving a Bachelor's degree in Aerospace Engineering at the Indian Institute of Technology. Nirath, who was born deaf and reads lips, had to not only learn a new language, but also work hard to understand the accents prevalent in her new city. Although she does wear a hearing aid, she doesn't speak sign language because it was never taught in the mainstream schools she attended in India. "I just had to learn to read lips, but if the teacher turned their head or something, I'd miss things. So, I would go home and teach myself from the book," she says.

That sense of self-direction and initiative serves her well in her role as a senior consultant with Booz Allen Hamilton's Infrastructure and Military Health Team, which she joined in January 2017. Because she supports the U.S. Fish and Wildlife Service and National Park Service (NPS), her job takes her to a lot of new places. In the past few months, she has helped run focus groups with NPS hiring managers in Alaska, Colorado, West Virginia and Minnesota, among other locations. This work is part of a larger project to analyze workforce barriers and help support inclusive recruitment, hiring and retention practices for federal employees. She says her favorite part of her job is that, "Everything I do interests me. It helps me hone my skills and gain new experience, and I work with a team that has shown me the power of working in diverse groups."

Nirath first came to Booz Allen as a summer intern in 2016, where she took part in the firm's Summer Games Challenge, a 10-week competitive program that culminates in three days of pitch sessions to the company's senior leaders. The project she worked on, a device that helps people who are blind navigate independently, was selected as the challenge winner over 52 other teams and resulted in a partnership with the National Federation of the Blind to develop a prototype of the device.

Nirath lives in Alexandria, Virginia and her worksite is in downtown Washington, D.C., so she typically commutes using the Metro, the area's public transportation system. At work, she sometimes requests CART services, an accommodation provided by Booz Allen, for group discussions, and often uses the Skype chat feature and text messages to communicate with clients and coworkers.

In her spare time, Nirath enjoys working out, running and spending time with animals — she volunteers at an animal shelter and a nearby farm with horses and dogs. One piece of advice she'd give to young people with disabilities is, "Every day is a challenge. Make the most of it and always remember that it is our abilities that count."