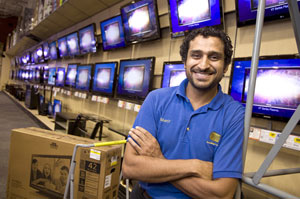 Munir Bashir helps power a high-voltage workplace. As team leader for merchandising and special promotions at a large electronics retailer's store in Springfield, Virginia, he spends his days making sure the store's current of products flows smoothly, from the loading dock to the sales floor.

Typically, Munir starts the morning by meeting with his team members about the things needing to be done that day. Then it's his job to make sure everyone understands and stays on task. His team's responsibilities range from ensuring shipment arrivals at the store's back door go smoothly, to creating and maintaining merchandise displays on the sales floor. Given the size of the store, this means Munir is nearly always in motion.

Communication is key to his success as a team leader, Munir says. He takes pride in his communication skills, not only because they make him more effective at his job, but also because he is deaf. As a result, he uses a lot of non-verbal communication tools, such as print outs and display schematics. He also reads lips. Munir knows sign language, a skill that also allows him to assist store customers who may be deaf; however, he doesn't use an interpreter to carry out his daily job responsibilities.

What Munir likes best about his job is the atmosphere — not only because he's a techie himself, but also because of his employer's emphasis on respect and communication. He originally applied at the store as a way to learn more about computers, but he's gained much more in knowledge and expertise in the three years since he was hired.

Munir hopes his success can help other people with disabilities, especially young people, also understand the benefits they can gain — and offer — in the workplace. "My advice is to convince an employer you can do the job and that you are alright with who you are," he says. "Don't get discouraged. Go for it. No matter who you are, just keep that positive mindset."