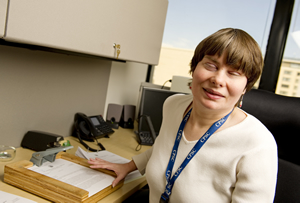 Every day, Kirsten Davidson's work contributes to the safety and health of America's consumers and families. A federal employee who works at the Consumer Products Safety Commission (CPSC), Kirsten is responsible for a variety of tasks associated with managing incoming and outgoing mail for the agency, which handles a high volume of correspondence given its mission.

The CPSC is an independent federal agency charged with ensuring the safety of a wide range of consumer products, such as toys, cribs, power tools and household chemicals, to name just a few. Since it was established nearly 40 years ago, its work has contributed to a significant decline in the rate of deaths and injuries associated with such products.

Kirsten, who is blind and has an intellectual disability, has worked at CPSC for almost half of those years. She works in the Office of the Secretary, where her responsibilities include retrieving and opening letters, stamping them as received and getting them ready for further processing through CPSC's system. At the end of each month, she also assists in preparing mailings to companies whose products were the subject of recent consumer complaints.

Kirsten works part time and gets to CPSC's headquarters using MetroAccess, the Washington, D.C. region's shared-ride, door-to-door paratransit service for people with disabilities. When not working, she greatly enjoys traveling; she has been as far as Norway and Japan with her family and also travels independently to see relatives in Wisconsin.

Kirsten first came on board at CPSC as part of an effort to increase the inclusion of people with disabilities within the Federal workforce. Her office was in need of more clerical support, and Kirsten had the skills to help fill the gap. "From day one, she always wanted to be the best she can be, to do her job and do it very well," her supervisor says.

Over time, however, Kirsten has contributed more to her office than just her daily work. According to her supervisor, having Kirsten on staff has been a learning experience for all employees, and her positive attitude adds to the office's morale. When asked about her job, this aspect of her personality shines through. "I love it," Kirsten says. "The people I work with are wonderful." Judging by the awards of achievement hanging about her desk, it's obvious that her colleagues feel the same way about her.