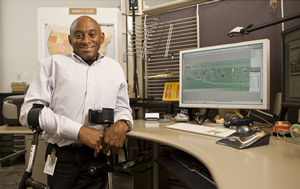 If you've ever seen a poster or picked up a brochure about topics such as child safety seats or drunk driving prevention, you might already be familiar with Kenny Allen's work. A graphic designer with a Federal contractor to the U.S. Department of Transportation's (DOT) National Highway Traffic Safety Administration (NHTSA), Kenny is part of a prolific team that produces publications, websites and other materials to promote road safety.

What Kenny likes best about his job is the freedom to be imaginative and the chance to design atypical products, such as a 20-foot timeline display he developed for use at a national highway safety conference.

Although he always liked drawing as a child, Kenny didn't envision graphic arts as a career at first. He earned his degree in business from James Madison University, and shortly thereafter found himself working in database design. Later, he "lucked" into a position in graphic design. Because he was always inclined toward working with computers, it ended up offering a good way to mesh his technical and creative sides, he says.

Kenny, who has osteogenesis imperfecta and uses crutches to walk, works onsite at DOT's main headquarters in Washington, D.C. The agency's complex is fully accessible, and he doesn't need any accommodations to perform his job. When not in front of the screen, Kenny likes to take in the broad view through travel. During a visit to Barcelona, he was especially enchanted with the city's architecture and cityscape, photos of which adorn his workspace.

Kenny feels graphic design is a good career option for many people, including people with disabilities, because it draws upon a variety of skills, including ingenuity. As a person with a disability, "sometimes you have to come up with creative ways of doing things just in daily life," Kenny says. "So a creative career can work well for people who are already used to thinking differently."