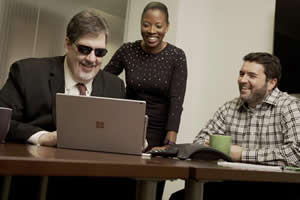 John Winfrey has his wife to thank for the career change that led him to his current role as Senior Technical Account Manager and Cloud Service Delivery Manager at Microsoft. Many years ago, while living in Little Rock, Arkansas, he was working as much as 90 hours a week as a manager for a fast food chain. He and his wife had two small children at the time and, "She told me it was time to either find a job that would allow me to spend more time with my family, or to find a new family," he says, with a laugh.

John, who is legally blind, had never before considered looking into programs for people with visual disabilities, but decided it was a good time to do so. Through his research, he discovered World Services for the Blind, a nonprofit organization founded by the Little Rock Lions Club to provide independent living and job training skills for people with visual impairments. He interviewed for and was accepted into a 9-month computer training program that the Internal Revenue Service (IRS) offered through the organization. Prior to the training program, he had only a passing interest in computers, but after he completed the course, he was hired by the IRS and found himself in a new job in a new career field.

After working for the IRS for four years, John landed a job as an engineer at Abacus Technology, eventually working his way up to Manager and Lead Technical Advisor. Then, in 2000, he began working at Microsoft, where he now leads a team that supports government sector clients. "My job is basically to make sure the products our customers buy work like they're supposed to," he says. To assist him in doing his work, he uses accommodations including magnification software and large screen monitors. His says his favorite part of his job is, "Having an immediate, tangible impact on customers. It's rewarding to lead a group effort to improve or fix whatever issues they may be encountering.'

John also acts as his division's Section 508 coordinator, bringing his own experience to bear on the product testing of new technologies and helping Microsoft ensure its products are accessible to all users. In addition, he is part of Microsoft's employee resource group (ERG) for people with disabilities, through which he helps new hires with disabilities adjust to working at the company.

Born and raised in Kansas City, Missouri, John also lived in Tulsa, Oklahoma before moving to Little Rock, and then Greenbelt, MD, where he has lived for the past 25 years. He works from home most of the time, but since the majority of his customers are outside the Washington, D.C. area, he also travels for work quite a bit. When he commutes to D.C., he uses the Metro, the area's public transportation system, or ride-sharing services.

In his free time, John is very active with the Knights of Columbus, leading volunteer activities supporting veterans, and organizing "angel tree' efforts to collect holiday gifts for local children from low-income families. He also loves watching sports — especially his beloved Kansas City Chiefs — and spending time with his family, including his grandchildren. So in the end, his wife's ultimatum worked, resulting in more family time and a fulfilling career that optimizes John's skills and talents. "It's the best of all worlds," he says.