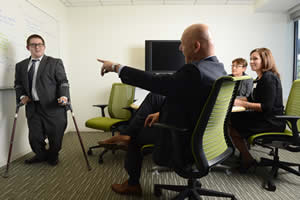 Getting where you want to be often means leaving where you are. This was certainly true for Eric Wright, a lead technologist with global consulting firm Booz Allen Hamilton (BAH).

Upon graduating from the University of Vermont, Wright, who was born and raised in the state and has cerebral palsy, wanted to move somewhere more accessible. He chose Washington, D.C. because of its extensive metro system, with elevators at every station.

With a degree in English, Wright didn't initially envision a technical career. He obtained his first job — doing data entry for the Internal Revenue Service — through the Workforce Recruitment Program (WRP), which he learned about at an informational event he saw advertised on campus. "They were offering free pizza, so I skipped class to go," he recalls. "It turned out to be the most profitable decision I made!"

Once in the workforce, Wright learned that his experiences gave him knowledge of the challenges others with disabilities face, including related to accessing information online. "I realized that I actually have some skills and perspective that would be useful," he says. "That's when I got into accessibility." In 2013 he started at BAH. Today, he spends most of his time teaching personnel from the U.S. Department of Veterans Affairs, a BAH client, how to make accessible websites, software applications and videos.

Regrettably, what attracted Wright to Washington later prompted him to leave. A number of ongoing problems with the Metro system made it harder to justify paying the area's high rent. So he brought his concerns to BAH management and now works remotely from Vermont.

Besides requiring enough space to maneuver his wheelchair, Wright's primary accommodation is speech recognition software that lets him dictate instead of type, because tremors make using a mouse and keyboard difficult. He initially worried about telecommuting, but Skype and screen sharing have proven useful.

A pivotal moment in Wright's life occurred in high school when he attended a Youth Leadership Forum at which he met adults with disabilities who talked about their jobs. "Here's an actual role model, here's somebody who's done it before," he recalls thinking. "Here's proof that I can do it, too." It was also there that he met his now fiancée.

In addition to his day-to-day responsibilities, Wright holds a leadership position with BAH's "diverseABILITY Forum," an affinity group for employees with disabilities. He also recently joined the board of the Northeast Disabled Athletic Association, which promotes sports such as adaptive sailing, hand cycling and sled hockey.

Whether at work or play, Wright likes to remind others with disabilities that, ultimately, "accessibility is about infrastructure. It's about making sure your environment and the people you work with are accessible and that you have channels to get what you need. So the one piece of encouragement I would give to people is, if the place you are isn't working, don't be afraid to try somewhere else."

And, as Wright shows by example, if you can make it work, don't be afraid to come back.