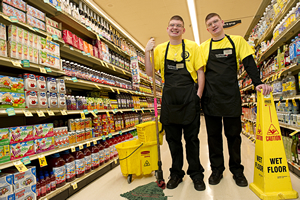 Savvy supermarkets often attract customers with "two-for-one" deals. And one in Waldorf, Maryland, recently took the concept to a whole new level when, with one hire, it gained two new valuable employees, identical twins Edwin and Jeffrey Willie.

Although Edwin and Jeffrey work independently of each other, they work the same schedule and share the same basic responsibilities. On any given day, they bag patrons' groceries, gather carts from the parking lot, and handle general maintenance duties such as sweeping, mopping up spills, cleaning bathrooms and taking out trash. They also assist with price checks, and cashiers appreciate their speed in doing so because it helps them keep their lines moving, which is especially critical during crunch times. Currently, Edwin and Jeffrey work the same schedule, three days a week from 1 to 6 pm, helping to cover the busy early evening period when people stop in to pick up items for dinner.

For both Edwin and Jeffrey, who have intellectual disabilities, this is their first paying job, although it is not their first work experience. Previously, both did volunteer work at an assisted living facility in their community, so when they began working at the supermarket, they were already familiar to many of its patrons. While their parents typically transport them to and from work, Edwin and Jeffrey live close enough to walk and sometimes do, and greatly value the ability to work independently.

According to Edwin's and Jeffrey's job coach, the store environment is a good match for them because, in addition to being very capable, they are both naturally outgoing and friendly. These traits are clearly evident when they talk about how much they enjoy their work.

Like many siblings, Edwin and Jeffrey also have a lot in common outside of work. Both like camping, video games and sports, and compete in athletics themselves through Special Olympics. However, their interests diverge on one contentious issue — Jeffrey roots for their hometown Washington DC football team, while Edwin is a fan of the team's long-time rival, the Dallas Cowboys. But ever the conscientious employees, they leave the competition at home.