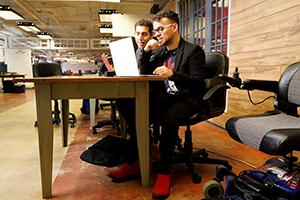 Growing up in Monterrey, Mexico, Diego Mariscal learned the importance of advocacy at a young age. When he was 12 years old, he and his teammates on his Paralympic junior swim team lobbied to have an accessible training center built. The effort was a rousing success, resulting in a brand new, fully accessible training center, and garnering attention from the media and Mexico's First Lady — and Diego being able to continue his training and represent his state, Nuevo León, in the Mexican National Paralympics from 2004-2009.

This early taste of the power of advocacy made a tremendous impact on Diego, who has cerebral palsy. He continued his advocacy efforts in high school, creating a series of disability awareness workshops that have since expanded to eight schools across Mexico. After moving to the U.S. in 2011 to study international relations at American University in Washington, D.C., he formed 2Gether-International, a nonprofit organization that develops advocacy campaigns to empower and unify young people with disabilities. In 2014, he was selected as a Youth in International Development and Affairs Fellow by the U.S. International Council on Disabilities.

Today, in his role as CEO and "Chief Disabled Officer" of 2Gether-International, Diego uses communication technology to engage youth with and without disabilities around issues such as education, employment and entrepreneurship. He says his favorite part of the job is that he learns something new every day. "It's challenging. I have nobody telling me what to do day to day, which is scary, but great," he says. "Yes, we have to be true to the mission of the organization. But what does that mean? Every day, I meet new people and have new experiences that help me answer that question."

Diego currently lives in Washington, D.C. and commutes to work on the bus. In his spare time, which he admits he doesn't have much of these days, he likes to read and still enjoys swimming, even though he no longer does it competitively.

Whether in the water or at work, Diego is a force to be reckoned with. He has also collaborated with the U.S. Department of State, the Inter-American Development Bank, the United Nations and leading technology companies like Blackboard to engage youth in disability issues. He has also been recognized both nationally and internationally for his work in disability advocacy, including being selected as an Architect of the Future by the Waldzell Leadership Institute of Vienna, Austria and a Global Changemaker by the British Council.

Through these and all his efforts, Diego is passionate about encouraging youth with disabilities to always try to excel. "Society often underestimates people with disabilities," he says, "So it's really powerful when as a community we are able to prove society wrong." It's sage advice that he models every day.