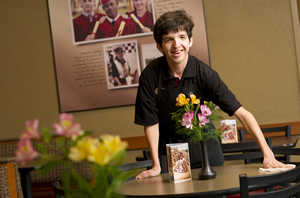 When Carson Bartlett is on duty, regular patrons at the fast-food establishment where he works know to expect a clean environment and a welcoming smile in the dining area. Carson's main responsibilities include tidying tables and generally helping customers if they need anything once they've received their order. He works three days a week, from 11 am — 2 pm, and is especially appreciated by fellow staff members and patrons during the busy lunch-hour rush.

Carson obtained his job through his local chapter of the Arc, an organization that supports people with intellectual and developmental disabilities, and promotes their full inclusion in the community. Today, the Arc continues to assist Carson through job coaching and transporting him to and from work. The organization is also helping him learn to navigate public transportation, and the goal is for him to be able to get to work and back independently over time.

When not on the clock, Carson is usually still out and about in his community. He likes going to the mall to shop for clothes and listening to country and western music. He also enjoys spending time with his older brothers and playing video games, especially tennis, boxing, bowling and golfing on the Wii.

According to his job coach, Carson's job is a great fit for him because social skills have always been his strength. So it's not surprising that the restaurant's manager has received many compliments about Carson's friendly disposition, from not only customers, but also coworkers. The feelings appear to be mutual; according to Carson, the thing he likes most about his job is the people he works with each day.