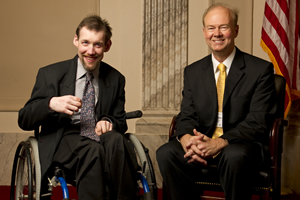 When Brendan O'Neill shows up for work each day, he contributes to not only the health and vitality of northwest Washington State's residents, but also its economy. A clerk at Valley Medical Center in Renton, Washington, Brendan assists in ensuring mail pick-up and delivery at the large hospital complex goes smoothly.

Brendan has been working at Valley Medical for 18 years and is highly regarded among other employees for his reliability, accuracy and affable personality. For those 18 years, Brendan has been contributing to his employer and enjoying the satisfaction that comes from a good day's work. He has also been making money and paying taxes.

Brendan's path to integrated employment started when he was preparing to transition out of secondary school. He was in a special education class for students with multiple disabilities when his mother urged the school system to prepare him for a job in the community. She persisted against resistance, and Brendan started at Valley Medical shortly thereafter.

Today, Brendan is an example of the benefits of integrated employment to individuals, families, employers and communities. What's more, he and his mother serve as advocates for expanding opportunities for integrated employment in Washington State and nationwide. In fact, in November 2011, Brendan and his mother, along with his service provider and employer, traveled to Washington, D.C., to serve on a panel at a briefing for congressional staff on the topic.

"Few people thought he could work, but I did," says Joanne O'Neill, speaking of her son. After 18 years of Brendan's successful employment, she's certainly proven the naysayers wrong.