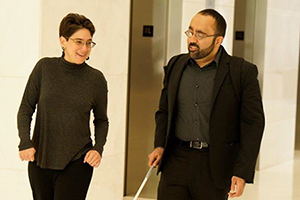 Amir Rahimi is a natural born storyteller. Although he once planned to be a patent lawyer, it's hard to imagine a career field better suited to his open, friendly personality than the one he's currently in — public relations. As the communications manager for the ENDependence Center of Northern Virginia, Inc. (ECNV), a community resource and advocacy center run by and for people with disabilities, his job entails many behind-the-scenes activities such as managing social media accounts, maintaining the center's website and writing press releases, as well as some development and fundraising work. He says his favorite part of the job is helping people with disabilities "be independent and live the lives they want to live."

Amir, a Maryland native who now lives in Arlington, VA, became blind in 2009 as the result of a fall during his senior year at the University of Maryland, College Park. After graduation, he attended a year-long training program at Blind Industries and Services of Maryland (BISM) in Baltimore, where he took classes in independent living, travel training, Braille and assistive technology. The intensive program included tasks such as cooking a three-course meal for 40 people by himself and navigating a 10-day solo trip to Miami. After completing the program, Amir was planning to attend law school, and even took the Law School Admission Test, but, "My heart just wasn't in it anymore," he says. "I had to do some soul searching to find out what I wanted to do and what I was good at."

Through his time in the BISM program and during an internship with the American Association of People with Disabilities, Amir became involved in the disability community and met people with disabilities working in a variety of fields, including engineering, medicine and business. "I learned there were other things I could do besides be a lawyer," he says. This revelation led him to ECNV, where he has worked since early 2016. "Seeing the difference ECNV makes in people's lives, that my colleagues make — helping people with disabilities find employment and housing and live independently — it makes me happy. That's what I love about my job." Amir is especially proud of the center's Life Enrichment Awards Program (LEAP) Awards, which provide grants to support youth with disabilities as they transition to adulthood. "I relate to them and where they are in their lives, because I was there eight or nine years ago." As a coworker, Amir is "an enthusiastic and very motivating person. He always looks out for his colleagues and is a very loyal friend," says Elizabeth Kumar, a peer mentor at ECNV.

In his spare time, Amir, who recently completed a master's degree program in public relations at George Washington University, enjoys going to standup comedy shows and Toastmasters events. He also plans to start taking improv comedy classes soon — where he'll test out his storytelling skills in front of the curtain for a change.