Unions in Our Communities and Democracy

Unions foster civic participation in our democracy and help build worker solidarity across racial lines. Strong unions help policymakers focus on the most important issues for working families, like fair pay, paid leave and support for public education. States with higher union density are far more likely to adopt pro-worker policies and, conversely, states with lower union density adopt more restrictive laws like voter suppression laws and invest less in healthcare and education. Today’s unions are becoming more involved in promoting Green Jobs and other green energy initiatives to help address climate change. Learn about the importance of strong unions to our communities and our democracy.

In states with higher union density, unions are more likely to win passage of laws and policies that benefit working people, including higher minimum wages, paid sick leave, and other pro-worker laws. Unions and their members advocate for these pro-worker laws to benefit all workers.

“Unions are not only good for workers, they’re good for communities and for democracy” 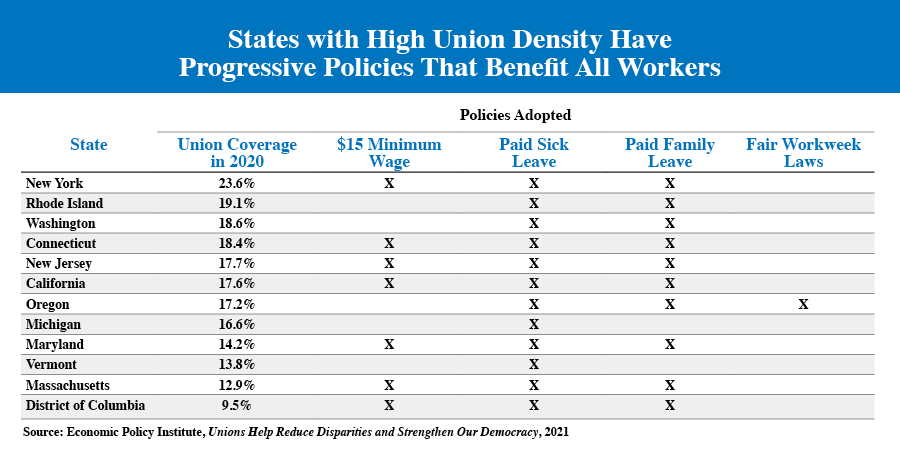 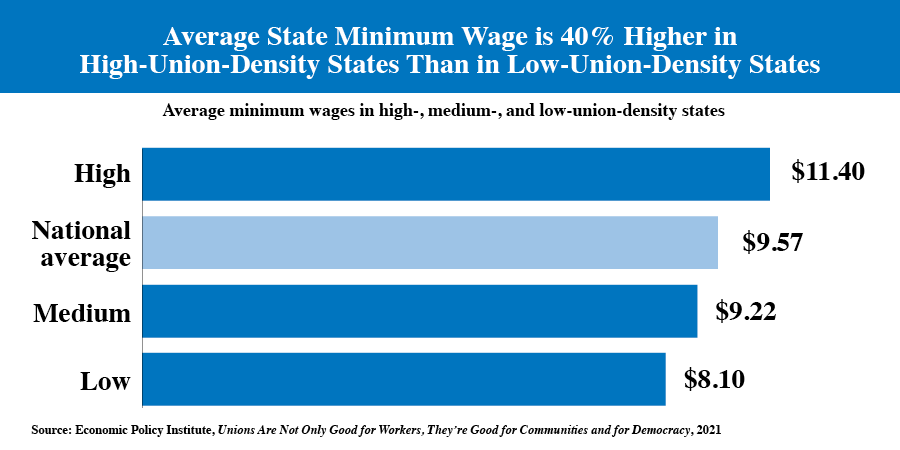 In recent years, many states have passed laws that restrict voting rights. These voter-suppression laws are more likely to be passed in states with lower union density. 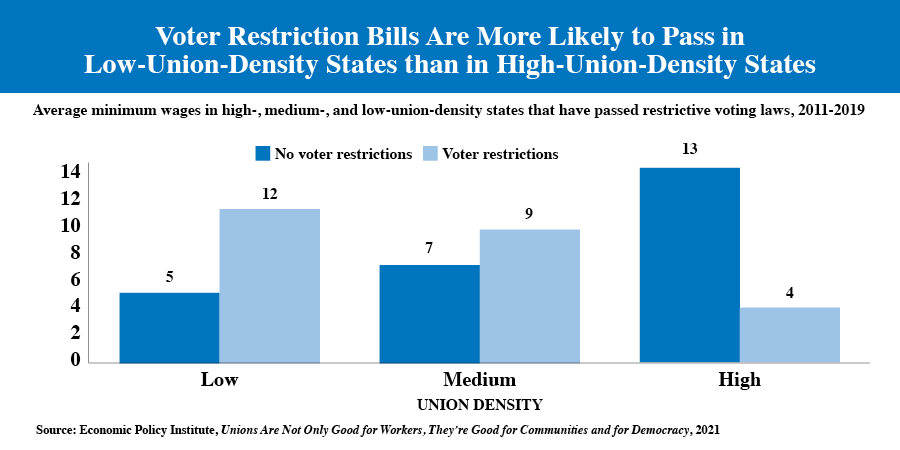 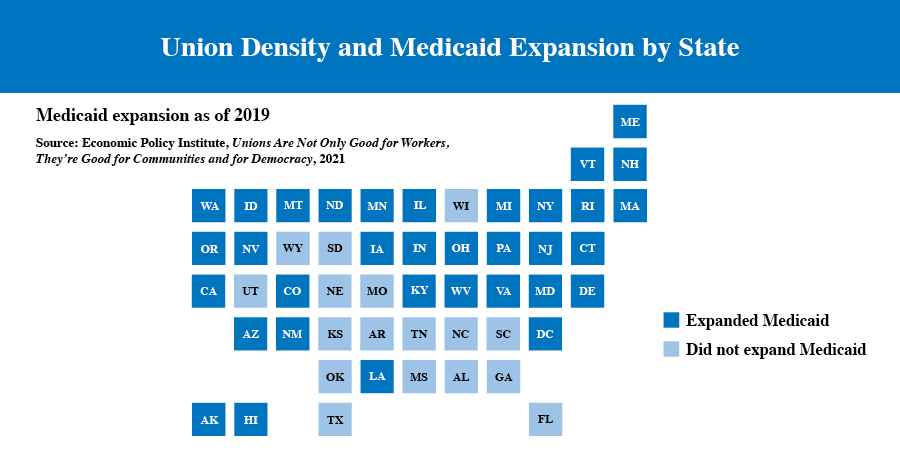 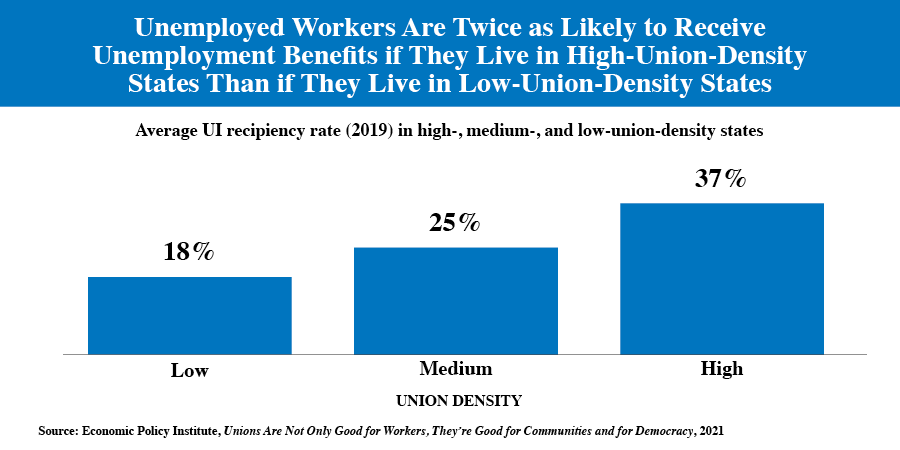 Unions promote better wages and enforcement of labor laws, and they help promote fairness and equity, especially along racial and gender lines. 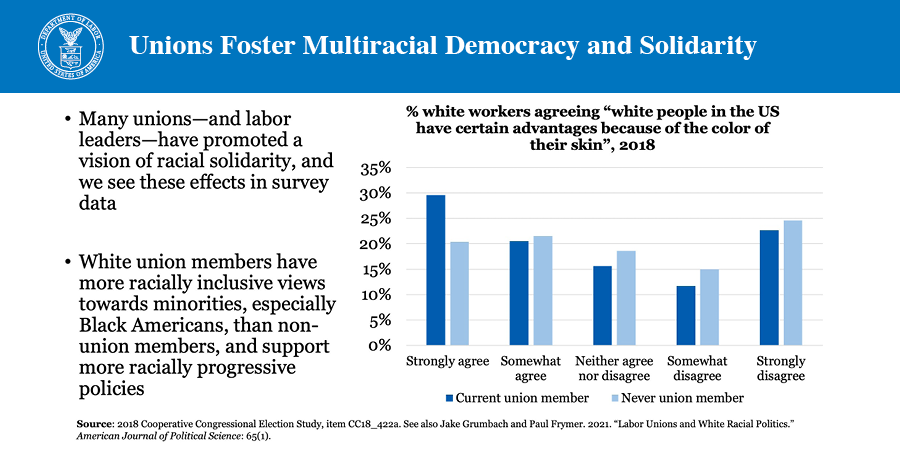 M-POWER, the Multilateral Partnership for Organizing, Worker Empowerment, and Rights, is a historic global initiative centered on ensuring working families thrive in the global economy and elevating the role of trade unions and organized workers as essential to advancing democracy.

Watch this short video that highlights M-POWER – the Multilateral Partnership for Organizing, Worker Empowerment, and Rights Initiative – a historic global initiative centered on ensuring working families thrive in the global economy and elevating the role of trade unions and organized workers as essential to advancing democracy.

Unions support our democracy by encouraging civic engagement. Research shows union members are more engaged on the issues and vote in greater numbers than people not in unions. 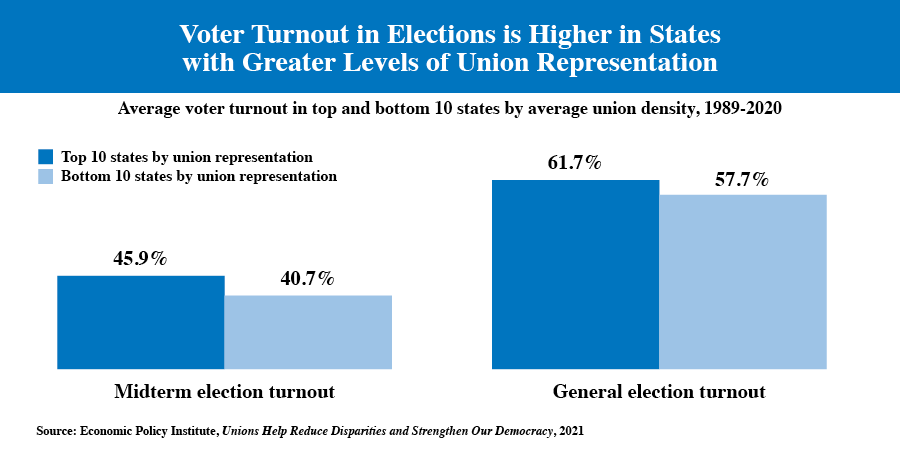 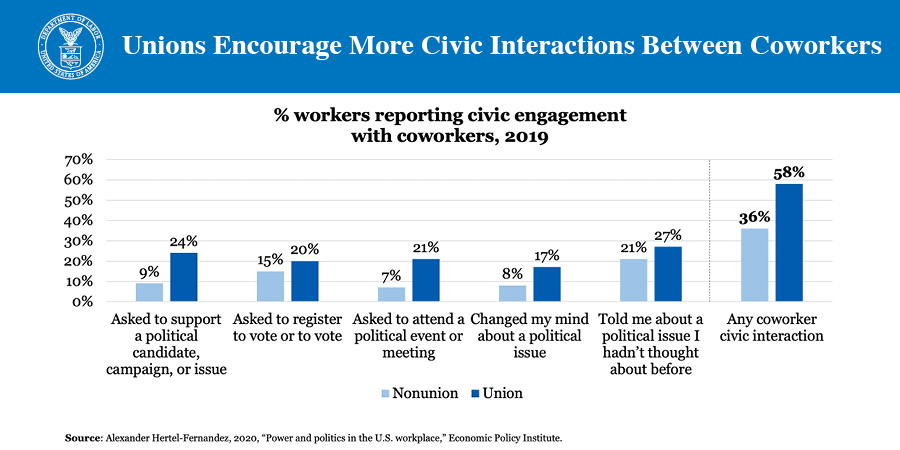 Unions are increasingly engaged in addressing climate change and reducing the harmful impact of climate change in the community. Through policy advocacy, labor-management initiatives, and other measures, unions are working to reduce harmful emissions and promote good, clean energy jobs.

Among the examples of efforts to address climate change are the following: North America’s Building Trades Unions signed a landmark agreement with Orsted to build up to 30 gigawatts of offshore wind energy on the east coast. In addition to producing significant amounts of clean energy, the partnership will create up to 83,000 jobs.

The Utility Pre-Craft Trainee Program is a pre-apprenticeship program developed by IBEW Local 18 in partnership with the Los Angeles Department of Water and Power. The program is also a cornerstone of the Repower LA Coalition that aims to recruit women and communities of color. The IBEW and the National Electrical Contractors Association have pledged to invest $140 million to train workers for jobs in renewable energy.

The Climate Jobs National Resource Center is working with unions, community groups, and policymakers to address the climate crisis and create good union jobs and equity.

Through joint labor-management training programs, including Registered Apprenticeship programs, unions help create and support job training and employment opportunities for workers in the building trades, health care, and other industries. Apprenticeships and the Labor Movement