What is a labor union? Who has the legal right to organize? Who protects these rights? Get the facts about unions, workplace organizing and the federal agencies that protect these rights.

A labor union is a group of two or more employees who join together to advance common interests such as wages, benefits, schedules and other employment terms and conditions. Joining together - or "acting collectively" - workers represented by unions have a powerful voice that strengthens their ability to negotiate with their employer about their concerns. Higher wages, health insurance, vacation days, paid sick leave and retirement benefits are a few examples of what workers achieve through their unions. Workers also pursue other enhancements - such as flexible scheduling, protections against harassment and safer working conditions - that improve the quality of jobs and workers' well-being.

Unions are membership-driven, democratic organizations governed by laws that require financial transparency and integrity, fair elections and other democratic standards, and fair representation of all workers. Learn about the laws that govern unions:

Collective bargaining is the mechanism or process for an organized group of workers ("labor") and their employer ("management") to pursue mutual agreement over workplace issues. The results of these labor-management negotiations are contained in a collective bargaining agreement. The CBA is a legally enforceable, written contract between a union representing a group of employees ("bargaining unit") and an employer in a workplace.

Often, workers who organize a new union find it difficult to reach agreement with their employer on their first collective bargaining agreement. The Federal Mediation and Conciliation Service provides training, mediation and facilitation at no cost to the parties to support collective bargaining and to help the parties reach an agreement. In addition, the Federal Labor Relations Authority helps to resolve disputes between labor and management in the federal sector.

When workers form a union, the collective bargaining agreement with their employer contains agreements on pay, benefits and other employment terms and conditions. The agreement includes pay levels and scales for different jobs and brings transparency to the process and helps ensure equity and fairness in pay for workers.

When concerns or problems arise, the CBA includes the "grievance and arbitration process," a straightforward way to resolve issues. The process spares union workers the time and expense of pursuing a claim in court or seeking government assistance.

Millions of workers in many industries and occupations are eligible to become union members. In very general terms, non-managerial employees who work for private-sector employers, including airlines and railways, and those employed by the federal government, and by state, county and local governments in many - but not all - states, may form and join labor unions.

Some employees, even non-managerial, do not have the right to unionize and collectively bargain with their employers as they are specifically excluded from federal, state, or local laws providing those rights. For instance, domestic workers, independent contractors and agricultural workers are not covered by federal labor laws that allow organizing and bargaining rights. In some states, public employees do not have collective bargaining rights. In the U.S., the type of employer for whom you work dictates which government labor agency, if any, oversees the process of forming a union at your workplace, and otherwise protects your rights to organize and collectively bargain. The following information can be helpful:

Like other workers, immigrant workers can form and join unions. The law prohibits employers from retaliating against any worker, including an immigrant worker, for trying to form or join a union. Immigrants working for private employers who believe their employer has violated these rights should contact the National Labor Relations Board at 1-844-762-6572 for assistance in filing an unfair labor practice charge. They may also contact their closest NLRB Field Office or submit a charge on the NLRB's website. Charges must be filed with an NLRB Field Office within six months of the potential violation. If a worker has filed a charge or has witnessed the alleged violation - and the worker or their representative tells the NLRB that immigration relief is needed to protect workers exercising their rights - the NLRB will consider seeking immigration relief for employees at that worksite. This relief may include deferred action, parole, U or T visa status, or other relief.

The majority of national unions are part of the American Federation of Labor and Congress of Industrial Organizations, a federation of national and international unions headquartered in the U.S. The AFL-CIO also includes hundreds of state and local federations comprised of unions at state and local levels. Several major U.S. unions are not part of the AFL-CIO, including the Service Employees International Union, the National Education Association, the International Brotherhood of Teamsters, and the United Brotherhood of Carpenters. Many small, independent unions are also not part of a national labor organization.

Nearly all national unions have union "locals" at the state or local level, and many have district councils and other types of regional structures. Local entities are the unions that typically get involved in resolving grievances and other issues at unionized workplaces.

To promote accountability and transparency, private-sector unions and those in the federal sector must file annual reports with the U.S. Department of Labor, which has a searchable database of these reports.

With thousands of local unions and millions of members in the U.S., workers seeking to join a union are likely to find a co-worker, neighbor or family member is a union member. Most unions offer websites to provide interested workers with membership information. The department's searchable database of annual reports filed by many unions can help you find more information.

In 2021, 14 million U.S. workers - or about 10.3 percent of the American workforce - were members of a union. Of these workers, 7.5 million union members were men and 6.5 million were women. Unions are also incredibly diverse, as nearly two-thirds of all union members are people of color or women.

The Bureau of Labor Statistics reports that union membership is highest among those employed in education, training and library services, and protective service occupations. Union Members - 2021 (bls.gov). 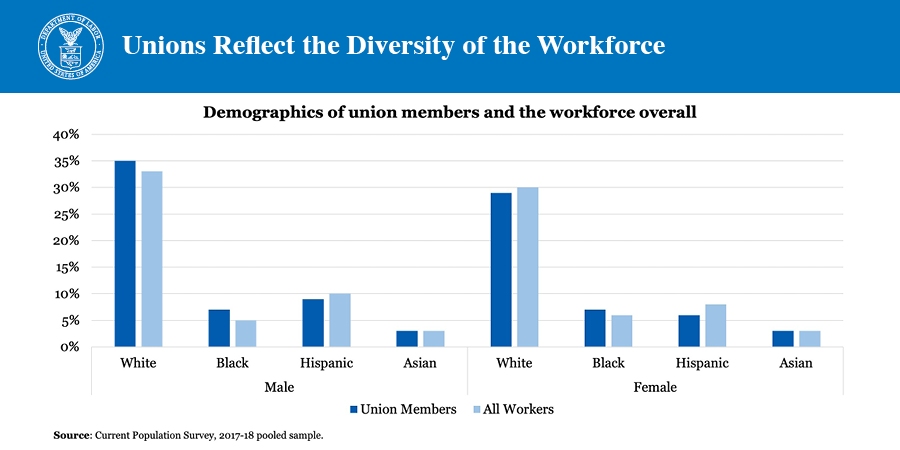 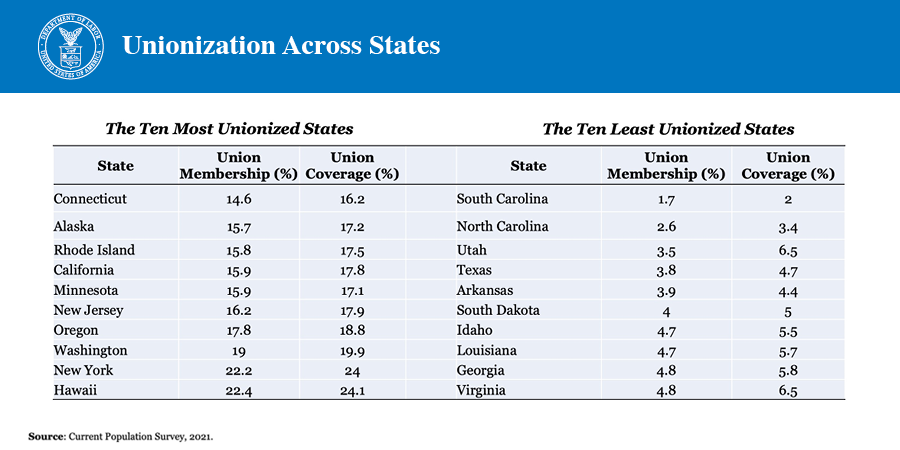 Workers seeking to form a union at their workplace should try to determine if other workers support the idea. With support from co-workers, employee organizers typically collect union interest cards, petitions or other written statements from co-workers to show interest in union representation. Organizing efforts may be supported by an established union seeking to represent workers at a workplace. Workers may also form an independent union. Once organizers collect signed cards or petitions from bargaining unit members, there are generally two paths to follow to form a union:

Majority signup | Voluntary recognition - Once a majority of employees in the bargaining unit sign cards seeking union representation, the union may then ask the employer to recognize their union voluntarily. If the employer agrees, the union becomes the workers' legal representative for purposes of collective bargaining. 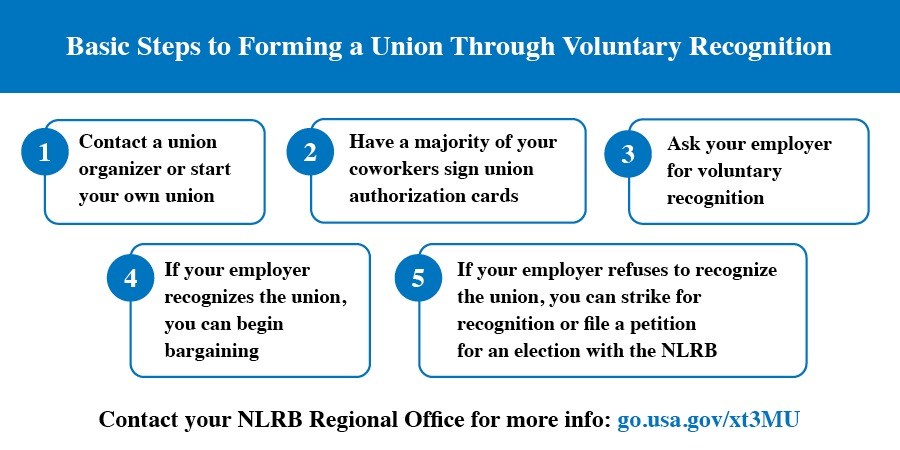 If the employer chooses not to recognize the union, the workers can file a petition with the NLRB or other labor agency and request a secret ballot election be held among the bargaining unit members.

Secret Ballot Representation Election. If workers collect cards or petitions that show at least 30 percent of the bargaining unit members want to be represented by the union, they can file a petition with the NLRB or other labor agency requesting a secret ballot election. This election gives each employee in the bargaining unit the opportunity to vote. If results show a majority of the voters vote for the union, the NLRB or other labor agency will certify the union. 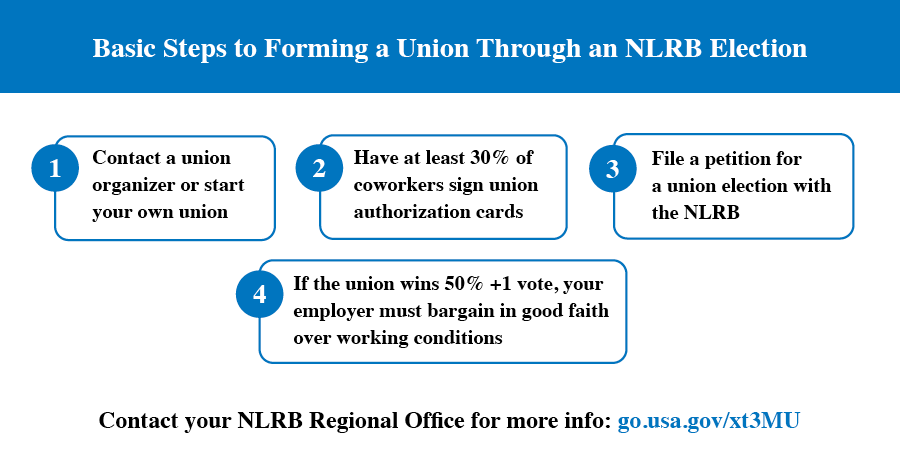 Employers, small and large, respect their workers' rights to organize and agree to negotiate a collective bargaining agreement. For example, when employees of Pavement Coffeehouse in Boston chose to organize, their employer respected their decision and negotiated a collective bargaining agreement. At Microsoft Corporation, the company recently announced new organizing principles stating it would respect its workers' decision about forming a union. 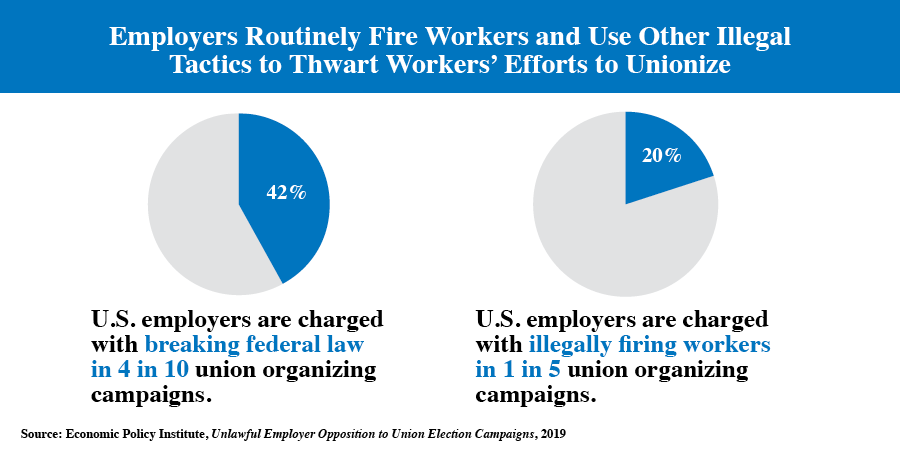 The NLRB handles charges of illegal anti-union activity in private-sector organizing campaigns. Contact the NLRB at 1-844-762-NLRB for more information or visit the board's website. 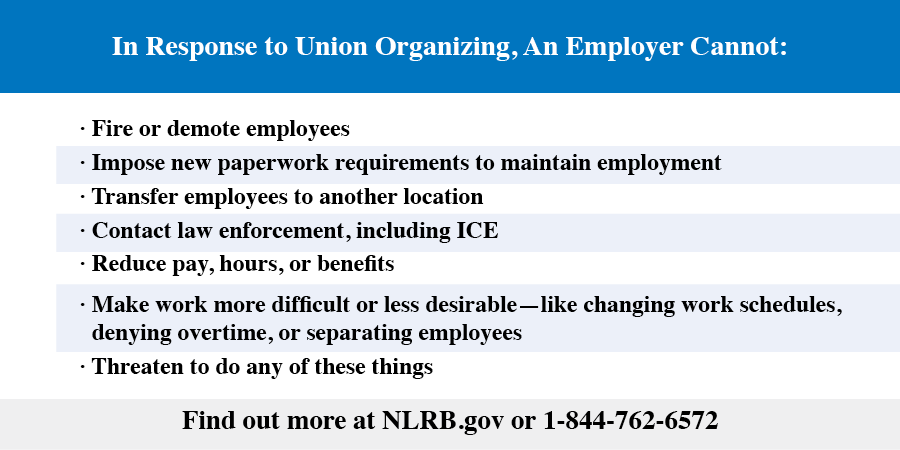 By law, employers cannot retaliate against a worker by cutting work hours or wages, disciplining or firing them, or by trying to punish them in any way for trying to form or join a union. A private-sector worker who believes their employer has violated their rights should contact the NLRB as soon as possible and speak with an NLRB agent to discuss their concerns. If needed, a worker may file - at no cost - an unfair labor practice charge alleging that their employer violated the law. Workers do not need a lawyer to file a complaint. Once filed, the NLRB will send a copy of the charge to the employer. The law protects workers and holds employers liable if they retaliate against workers who file charges or take part in an NLRB investigation or proceeding. Contact the NLRB at 1-844-762-6572. An employer found to have broken the law may be required to pay back wages and other related expenses.

In three out of four worker organizing drives, employers hire outside consultants to engage in anti-union campaigns or "persuader" activities, in response. In nine out of 10 anti-union campaigns, employers hold mandatory "captive audience" employee meetings, where employers emphasize their anti-union views. Current labor laws do not give union supporters equal time at these meetings to present their views. While these meetings are common, they may or may not be legal. The NLRB enforces workers' organizing and bargaining rights, and answers questions about whether an employers' activities are legal. Contact the NLRB at 1-844-762-NLRB.

When employers hire outside consultants to run anti-union campaigns, the employer and the consultants are legally required to file public reports. The department's Office of Labor Management Standards collects and publishes these reports online. OLMS also offers a tip line for reporting non-compliance with the persuader reporting requirements.

Federal law protects the rights of workers to act together to address workplace conditions, with or without a union. These protections extend to certain work-related conversations on social media, such as Facebook and Twitter and give workers the right to act with coworkers to address work-related issues through open conversations with one or more coworkers. Protected conversations can include talking about wages, benefits and working conditions, or joining with co-workers to talk directly to the employer to address concerns. By law, employers cannot fire, discipline, demote, or penalize workers in any way for engaging in these activities. 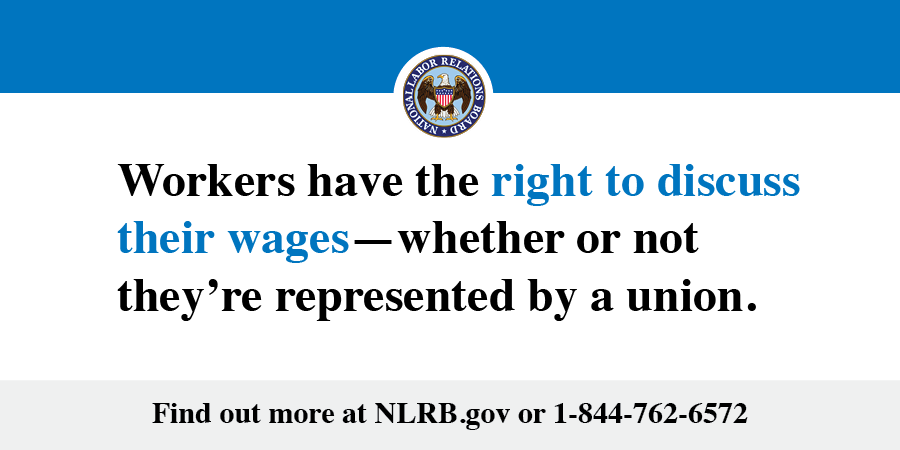