On March 11, 2021, the Department of Labor (Department) announced a Notice of Proposed Rulemaking (NPRM) to rescind its regulations interpreting joint employer status under the Fair Labor Standards Act. The final rule establishing the regulations published in the Federal Register on January 16, 2020 and took effect on March 16, 2020. The Department proposes to rescind the rule and remove the regulations at 29 CFR Part 791 established by the rule. The Department invites public comments on the NPRM for thirty (30) days following publication of the NPRM in the Federal Register on March 12, 2021.

Anyone who submits a comment (including duplicate comments) should understand and expect that the comment, including any personal information provided, will become a matter of public record and will be posted without change to https://www.regulations.gov, including any personal information provided. WHD posts comments gathered and submitted by a third-party organization as a group under a single document ID number on https://www.regulations.gov.

The U.S. Department of Labor (the Department) has received requests, available as part of the rulemaking docket on www.regulations.gov, for an extension of the comment period associated with the Notice of Proposed Rulemaking (NPRM) titled Rescission of Joint Employer Status under the Fair Labor Standards Act Rule that was published in the Federal Register on March 12, 2021. 86 FR 14038. The comment period for the proposed rule expires on April 12, 2021. The Department will not extend the comment period for this NPRM and you may review the Department’s full response at this link: https://www.regulations.gov/document/WHD-2021-0003-0275.

On September 8, 2020, the district court for the Southern District of New York entered an order and judgment vacating most of the FLSA Joint Employer Final Rule issued by the Department and effective in March 2020, on the grounds that it is contrary to law and arbitrary and capricious.  The district court vacated all of the substantive provisions of the Rule concerning the scenario in which an employee works one set of hours that simultaneously benefits another individual or entity (including the provisions described in the bullet points below and most of the provisions described in the documents linked below).  An appeal is currently pending before the Second Circuit Court of Appeals. 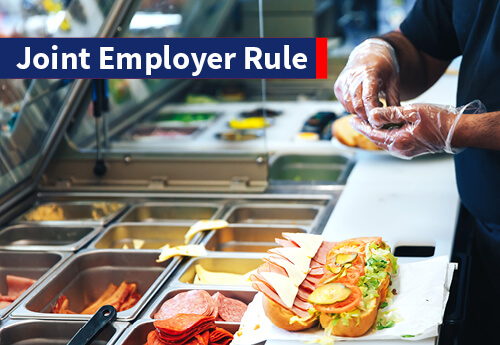 In the final rule, the Department:

The final rule published on January 16, 2020, in the Federal Register.