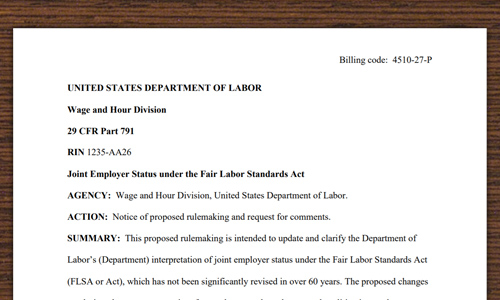 In 2017, the Department withdrew the previous administration’s sub-regulatory guidance regarding joint employer status. That guidance did not go through the rulemaking process that includes public notice and comment.

The Department proposes a clear, four-factor test—based on well-established precedent—that would consider whether the potential joint employer actually exercises the power to:

The proposal also includes a set of examples for comment that would further help to clarify joint employer status.

The Notice of Proposed Rulemaking (NPRM) was published on April 9, 2019 in the Federal Register. Interested parties may submit comments on the proposal at www.regulations.gov in the rulemaking docket RIN 1235-AA26.

On May 13, 2019 the Department announced that comment period originally set to end on June 10, 2019 has been extended until June 25, 2019. Only comments received during the comment period will be considered part of the rulemaking record.

The Department will consider all timely comments in developing any final rule.