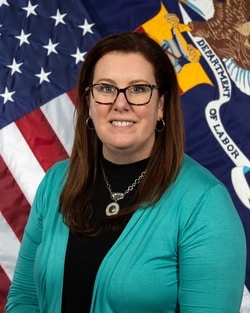 President Donald J. Trump nominated Cheryl Marie Stanton to serve as the Administrator of the Department’s Wage and Hour Division (WHD), and the U.S. Senate confirmed Stanton’s nomination on April 10, 2019. She was sworn in as WHD’s Administrator by U.S. Secretary of Labor Alexander Acosta on April 29, 2019.

Stanton brings a wealth of experience to WHD, most recently having served as the Executive Director of the South Carolina Department of Employment and Workforce. Under her leadership, South Carolina’s jobless rate dropped to its lowest point in at least 50 years. During that time period, South Carolina’s workforce system helped place over 500,000 South Carolinians into jobs. Stanton also partnered with her colleague at the Department of Corrections to create the Second Chance job re-entry program for ex-offenders, receiving national accolades. She also oversaw two major information technology modernization projects that improved customer service and increased efficiencies for employees.

Stanton served as the White House’s principal legal liaison to the DOL under President George W. Bush. She is a graduate of Williams College, and earned her law degree from the University of Chicago Law School.