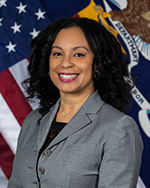 Dariely Rodriguez joined the OFCCP as its Chief of Staff on February 1, 2021. Most recently, Ms. Rodriguez served as director of the Economic Justice Project at the Lawyers’ Committee for Civil Rights Under Law where she led the Committee’s efforts to combat discrimination in employment, healthcare, and economic opportunities on behalf of communities of color. In this capacity, she served as plaintiff-side counsel in various impact litigation matters. Dariely has co-authored or otherwise significantly contributed to amicus briefs before the Supreme Court and other federal courts. Dariely also served as co-chair of the Employment Task Force of the Leadership Conference on Civil and Human Rights, the national umbrella organization of American civil rights groups.

Before joining the Lawyers’ Committee, Ms. Rodriguez worked as an Assistant Attorney General in the Civil Rights Bureau of the New York State Attorney General’s Office. Prior to joining the New York State Attorney General’s Office, Ms. Rodriguez worked in private practice as an employment attorney. She received her J.D. from Maurice A. Deane School of Law at Hofstra University where she was the recipient of the Dwight L. Greene full tuition scholarship. She received her B.A. from New York University.